In this post I examine a "micro" example from East Oxford that illustrates how street design fails people walking or cycling: where the lane from Boundary Brook Rd meets Howard St.

I've singled this example out because it's on my school-run and I walk through it twenty times a week, not because there's anything notable about it. There are hundreds if not thousands of other places around Oxford where things that inconvenience or delay or even endanger people walking and cycling are just accepted (while hundreds of thousands of pounds are spent on micro-optimisation of junctions to cram through a few percent more motor vehicles in peak hour).

The little footpath lane on the left after the tree connects to Boundary Brook Rd, where there is both a primary school and connection to another foot-cycle path leading to Florence Park and other schools. It is quite a busy link, with a steady stream of people walking and cycling at peak times. (Note that Howard St is one way, away from the viewer in the Google Streetview above.)

The problems with the current layout are obvious. There are no dropped kerbs, or indeed any routes between the carriageway and the lane, so people cycling end up on the pavement, and the space is so cramped that larger buggies, wheelchairs, box bikes, tandems, and so forth can only negotiate it with difficulty. (On bin days I've seen people forced to dismount and move bins to be able to get through at all.)There's no road crossing here, or indeed anywhere on Howard St between Iffley and Cowley Rds (the junctions with Catherine St and Golden Rd are raised but have obstructive gutters, and junctions are the least safe places to cross), so anyone in a wheelchair or blind is going to find it tricky if they are coming from or going to Catherine St. 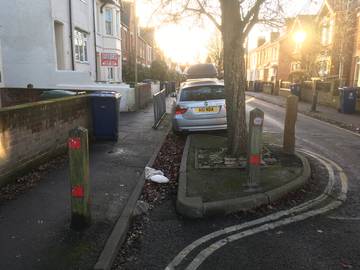 someone has improvised a micro-ramp

(I'd hope Oxfordshire Highways can do better)

The solution seems obvious to me. The fence should be removed and there should be a raised crossing here directly in line with the lane, offering an easy, kerb-free passage for people pushing buggies or in wheelchairs; it should be coloured or surfaced differently and there should be give way markings on the approach. The crossings at either end of Howard St aren't perfect, but could be models. The part of the crossing behind the tree would need to be protected by bollards to prevent it being parked on. There might be some risks from people cycling along the lane entering the street too fast, but a raised and marked crossing should induce traffic on Howard St to slow down; if necessary, an angled exit onto Howard St could also be included.