Our thirty seven boxes from Australia were delivered on Wednesday, having taken about nine weeks door-to-door. Here's a photo of them sitting in our living room. 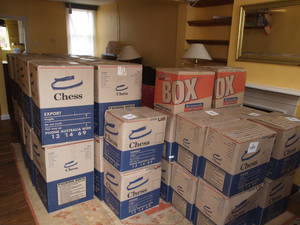 Nothing got broken in transit, though some of the books were packed sideways instead of flat and got a bit "folded". I'm very glad I packed my books myself.

We've now unpacked everything and actually managed to find somewhere to put it all! We've managed to put a lot of the surplus stuff that came with the house under the eaves in the roof, and there's actually a fair bit of storage space, especially shelves. We also left a lot of stuff - probably over half our goods by volume - in storage in Australia.