<- teaching small cardinal numbers to a toddler
the language explosion ->

This is by no means comprehensive, but I thought I'd write a bit about some of the books we and Helen have enjoyed most over the last year or so. Some of these have been given to us or recommended to us by friends and family, some of them I found reading online reviews and lists. (Book titles are linked to Amazon UK.) 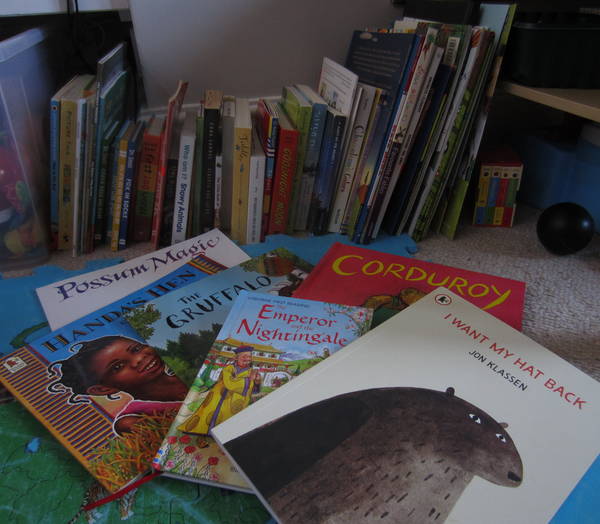 some of the downstairs books

Julia Donaldson's Toddle Waddle was the earliest hit, with a good balance of repetition and variety, and is largely responsible for Helen's first word ("duck"). Other early favourites were a fairly non-descript Book of Nursery Rhymes ("The Grand Old Duke of York" and suchlike) and Baby's First Hundred Words, with photographs of common household and everyday items. In the same vein as the latter, Alison Lester's ABC is probably aimed more at early readers, organised alphabetically and with some quite esoteric words ("ocelot"), but it has also been (and continues to be) popular. (I think the time for the other Alison Lester books is yet to come.)

Interest in the classic Goodnight Moon comes and goes - it is weirdly surreal, but that's half the attraction. In a similar vein, but more modern in its feel, is Alison Jay's Picture This, which contains pictures with interesting details and visual links (similar to the classic Each Peach Pear Plum). And of course there's Where is the Green Sheep?

Regular reading now involves more complex books. We have most of the Julia Donaldson books, but Room on the Broom and the classic The Gruffalo are probably our favourites. Then there's Shoe Baby and Pip and Posy: The Bedtime Frog (I'd be more inclined to get the others of this series if Posy didn't giggle). And Don Freeman's Corduroy, which Helen loved right from the first reading, listening all the way through without losing concentration once, is I think the longest book she's had read to her in one go, though recent acquisition Blueberries for Sal is longer. And we have several of a series of Usborne first readers, of which she really loves The Emperor and the Nightingale.

There are a couple of random adult books that happened to be on the shelf in the nursery and which Helen has taken a shine to. She keeps on picking out the The Book of Yoga and can leaf through it for some time (while I amuse myself by reading out the Sanskrit names for the poses) and a Garden Wildlife book with photographs (albeit small and not always clear) is a hit.

There are some surprisingly crappy childrens books out there. We were given two in some kind of free parent pack which consist of photos of babies with texts that have no real baby appeal at all - I eventually decided that the target audience here was not children but sub-literate parents... Then there's a "colour" book which joins colours with random animals and unconnected texture patches for touching.

Update a month on. Some new favourites include: