calming traffic and lowering speeds is not enough

Speeding is certainly a problem in Oxford, as it is elsewhere, but the primary problem in many places is too many cars in streets that simply aren't appropriate for those volumes of motor traffic. Where this is the problem, speed is a secondary problem and traffic calming measures don't really help and can even be counterproductive. I wrote a long post about this, looking at one example (Rymer's Lane) in detail.

People have also been trying to stop speeding for a long time, with very limited success. Better enforcement would help, but achieving consistently lower speeds across the city is likely to either cost a fortune (put speed cameras absolutely everywhere) or take decades to roll out (mandate Intelligent Speed Assistance in new cars and make turning it off an offence). 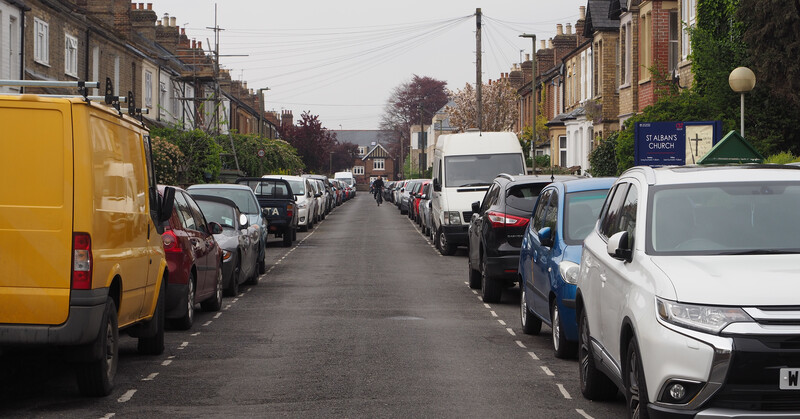 To see where traffic calming does work, consider Charles St, where cycling is ok even with small children. Traffic volumes here are very low and the narrowness of the carriageway, between the parked cars, really does constrain vehicle speeds (as well as deterring through traffic). Even at a child's cycling pace one is likely to meet only one or two vehicles, and they are almost invariably residents looking for parking, not people in a hurry who are going to speed or force an overtake.

Walking on Charles St can be a problem because parking takes up so much of the pavements, but people do walk in the carriageway and it almost works like a 'home zone' or Dutch woonerf, where there's no real pavement/carriageway separation and people walking share with people cycling and with motor vehicles. This requires traffic volumes to be really low, probably around 500 motor vehicles per day maximum. (This could be formalised on Charles St with a 10mph speed limit, if that were allowed, and some kind of "cars are guests" signage.)

For more on how carriageway narrowing can be used to calm motor traffic, there's an excellent piece by Robert Weetman. But the Dutch do this only where through routes have been blocked or removed and motor traffic has been reduced to a minimum.

Taking a different approach, Waltham Forest does traffic calming using sinusoidal speed humps every hundred metres - but, again, inside low traffic neighbourhoods, not as an alternative to them.

An interesting document here is the Department for Transport's "Cycle Infrastructure Design" guidance, which suggests that if we want cycling to be accessible to everyone, not just the more confident, then mixing people cycling with motor traffic is only workable if traffic volumes are under 2000 motor vehicles per day and 85% of vehicles are going under 22mph. This would be busier than a woonerf, but still usable for cycling

Traffic calming and lower traffic speeds are an important complement to reducing motor traffic volumes, but not an alternative to doing that. 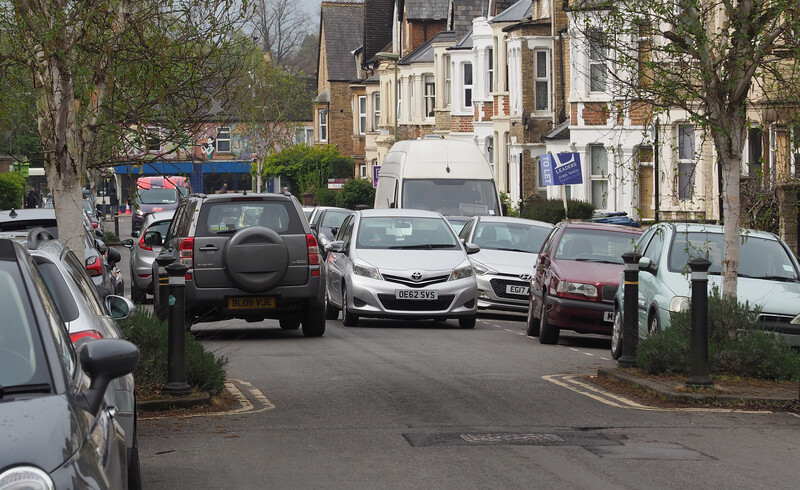 To see this from the other side, stand on Divinity Rd for a while and watch the traffic there. With ten times or more the traffic volume of Charles St, it is quite obvious that what works there won't work here: adding more traffic calming measures is not going to help, while narrowing the entire road would produce gridlock. As it is, the wide sections of the road encourage high speeds when there are breaks in the traffic, while the narrow sections and bunching of traffic result in jams which squeeze anyone cycling. Divinity Rd needs drastic traffic reduction.

Oxford's main roads are a different kind of problem: they could do with traffic reduction too, to prevent peak hour congestion, but they also require proper separated cycle tracks (or enforced 20mph limits and adequate cycle lanes) and adequate crossings.