<- downsizing the UK
from grandfather ->

the EU can't save Britain

The European Union can't save the United Kingdom from the effects of Brexit. Even if they give us everything we want — or the UK government accepts the ongoing payments, freedom of movement, and so forth necessary to maintain membership of the Customs Union and Single Market — leaving the EU will still be a huge shock for which we are completely unprepared. 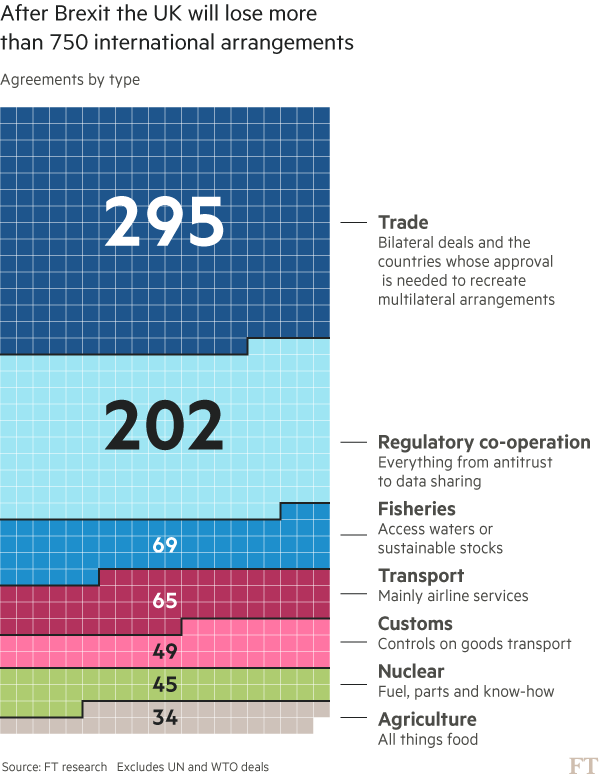 This is the result of agreements between the EU and third countries (or groups of countries). The trade agreement between the EU and South Africa, for example, is an agreement between the (then) European Community and South Africa. The European Union can't make that agreement apply to goods or people from outside the Union even if it wanted to, any more than the UK could (as part of its great "Repeal" Bill) transfer an international treaty of the EU into its domestic legislation. There is no alternative but to negotiate a new agreement here. Similarly with the US-Euratom agreement on nuclear cooperation. The European-South Korean open skies agreement. And so forth. (There are, the Financial Times explains, some 750 such agreements.)

All these agreements will cease to apply to the United Kingdom on 29 March 2019. In some cases the UK would have to remain a full member of the Union to avoid that; in other cases it could potentially retain access to them (through, say ongoing membership of Euratom or the European Common Aviation Area) but the current government appears to have ruled that out (by notifying its intent to leave Euratom, and by stating its unwillingness to accept any role for the European Court of Justice).

There is an argument that the UK will, as an individually named signatory to "mixed" EU agreements, remain a party to them. But as that link explains, this will depend on the wording of individual agreements. The South African trade agreement, for example, is quite consistent in talking about "goods originating in the Community", "residents of the Community", and so forth, so whether the UK technically remains a party to it or not, it is not actually going to be any use to UK exporters, even if we remain within the EEA/Common Market.

There is no evidence that the UK government is in any way prepared for this, or that they've even started work replacing just the thirty or forty most critical of these agreements. In any event, the idea that we can solve all our problems just by being tough enough in negotiations with Brussels is a complete fantasy.

The costs of Brexit

The UK is going to be spending at least a billion pounds a year on extra bureaucracy (lawyers, managers, negotiators, IT staff and infrastructure, etc.) to replace the 30 or 40 European regulatory agencies whose remit we will be leaving, and possibly considerably more than that (certainly in the first five or ten years when we have to build infrastructure and negotiate or renegotiate treaties and agreements).

Now £1 or 2 or even 3 billion a year is not actually that much in the grand scheme of things, for an economy the size of the UK's, but it should really be counted as an offset of our notional £8 billion a year net contribution to the EU budget. (It's cheaper to pay 1/6 of the costs of a regulatory body like Euratom than 100% of the costs of a smaller version of our own.)

What worries me is not the additional costs here, but the risk that we will underspend on this, leaving us (especially when forced to negotiate under time pressure) with substandard agreements and systems. In any case, the government needs to get cracking with this and stop bleating about bad deals and attempting to blame everything on the EU.