It's not going to impress those of you living in Stockholm, Uppsala, or Berlin, or who spent two winters in Basel, but it's got rather chilly here in Oxford: temperatures as low as -6 overnight and days - possibly a whole week - where it doesn't rise above 0. (Scotland has copped the worst of it so far, and a record -18 was recorded in Wales - Guardian updates.) 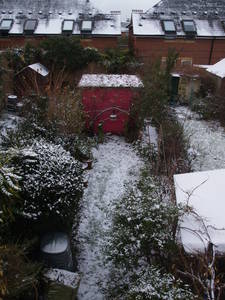 snow in our backyard

Our terrace lacks double-glazing and has cracks in floorboards and around doors, so when it's 0 outside the central heating only manages to keep the temperature at 14. But I've acclimatised enough that that seems quite comfortable - and wearing a scarf inside perfectly normal.

I haven't got a proper coat and seem to be doing ok without, just wearing a lot of layers: up to five on top, two on my legs, plus a scarf, mittens and a beanie. I am, however, going to have to get some proper shoes, as my beloved Dunlop Volleys don't really cut it for warmth (especially with the extra ventilation holes they acquire if you do much scrub-bashing in them) or traction on ice.

When people have asked me how I like Oxford, I've been saying "great, but I want to live through a winter before making a judgement". So far it's been ok.