<- between the bicycle and the electric car
Town, gown, or tourist? ->

Oxford is a vastly nicer environment for cycling than any part of Sydney I know about, or pretty much any town or city I have visited. This is not because of its cycling infrastructure, which is actually pretty pathetic, but because of its low speed limits.

Most of the cycleways in Oxford consist of thin green strips painted on the side of roads: usually too narrow and mostly taken up by gutter, and often littered with grilles and manhole covers and other hazards. I'm not sure I've done any cycling on an actual cycleway, with a finished surface and proper separation from traffic. (Possibly a stretch along Marston Road?)

Nothing in Oxford is quite as egregious as some of the cycleways in Sydney. The street in Glebe we lived on is ostensibly a cycleway, but since the only sign of this consists of bicycle symbols that are obscured by parked cars I didn't even realise that until several months after we'd been living there.

An On Yer Bike column in the Oxford Mail suggests the poor infrastructure results from control of Oxfordshire Council by rural Conservatives who don't care about Oxford.

So why is Oxford such a pleasant place to cycle?

It helps that Oxford is largely flat, though it's not particularly exceptional in that regard. And drivers are more tolerant of cyclists (at least than Sydney drivers), probably because they have no choice given the sheer density of cyclists - and perhaps because most of them cycle themselves - but that's more an effect than a cause of a cycling culture.

Most importantly, the speed limit in almost all of Oxford is only 20 mph (about 32 km/hour), with only the arterial routes inside the ring-road 30 mph. Pedestrian Liberation has a nice comparison of urban speed limits in different cities, which includes a map of Oxford showing the speed limits (the other cities shown include Berlin and Milton Keynes). 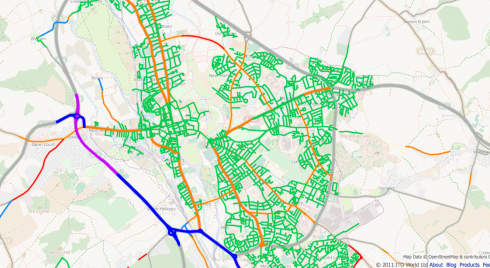 At 20 mph, cyclists can co-exist with cars in reasonable comfort.

There's a debate over whether bicycle paths should be segregated or not, or whether it's safer having bicycles in the flow of the traffic. See, for example, the Wikipedia article on Segregated cycle facilities.

In most of Oxford streets are too narrow to make segregated cycleways possible, but my feeling is that with low speed limits they're not so critical.

High priority should be given to properly segregated, or at least better quality, cycle lanes on the 30mph arterial routes (or the provision of alternative routes).

There are areas where the cycle lanes are problematic. Heading north on Longwall St, for example, at first there is no cycle lane, then there's a brief stretch with a very narrow cycle lane, then there's no cycle lane, then after Holywell St it reappears again. This is just confusing. Where there's no room for a proper width cycle lane, a better option would be to put big green bicycle symbols in the middle of the lane, making it clear to motorists that they are expected to share the space. (This is what has been done on Cowley Rd.) It also wouldn't hurt to put up a few extra 20 mph speed signs to help remind motorists of the speed limit.

Heading south on Longwall, there's a cycle lane as it approaches High St. This is again very narrow, however, and cyclists filtering past traffic queued at the traffic lights end up hitting car mirrors. It would make sense to widen the cycle lane here, and perhaps put up some kind of notional barrier to stop cars blocking it.

No effort has gone into making those areas of the inner-city that are blocked off to vehicles cycle-friendly. The roads are not well-surfaced, even though the limited vehicle traffic means one good-quality surfacing would last well. (And I'm not talking about the few areas of cobblestones here; those are presumably of heritage significance.) There are also many places where there are curbs across bicycle routes. Reworking these areas with cyclists in mind would make it easier for them to avoid pedestrians. (And might directly improve things for pedestrians, too: on a Friday or Saturday night in the inner city there are plenty of women in high heels, sometimes having a tricky time negotiating rough surfaces.)

For anyone in Oxford interested in these kinds of issues, CyclOx is the place to get involved.