<- the National Childbirth Trust and the class system
Why is Venice so attractive a city? ->

What is it? It's a Kettler Spirit, the product of a respected German company which sells online into the UK (though they do have a showroom in Redditch as well). Basically an upright city bicycle: what one might call a "Dutch bike" or a European city bike, though it's fundamentally pretty similar to my other bike, a thirty year old English three-speed roadster. The list price for it was £595, but Kettler have sales a couple of times a year and I picked it up for £295, including VAT and delivery. 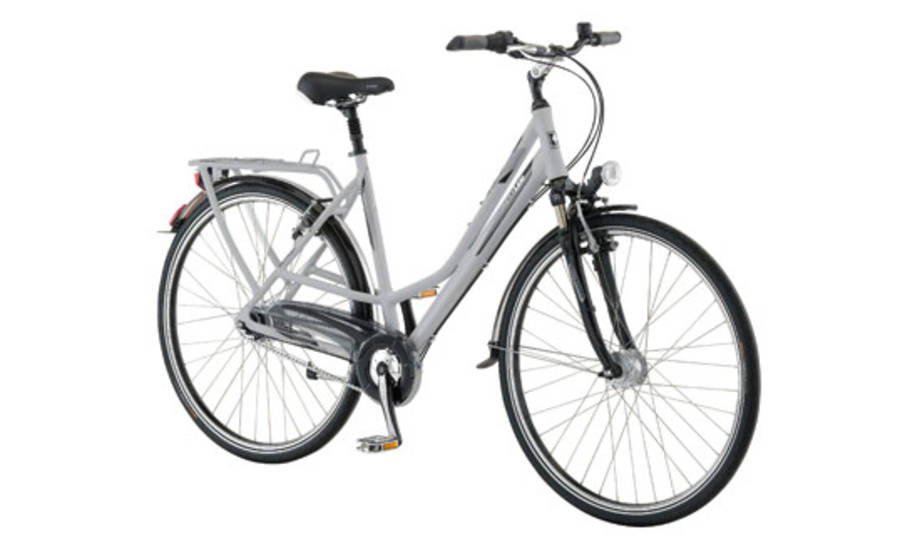 The bicycle came fully kitted out: not just with mudguards, kickstand, chainguard, and integrated rear pannier rack, but with a suspension fork and seat post, dynamo lights, a built-in parking lock, and even an emergency pump! This is the very opposite of a "buy it naked and spend £100 adding necessary extras" cheapie, or a racing bike stripped for speed. The only assembly needed was screwing on the pedals and rotating the handlebars, but I took it to my local bike shop to have a proper set up. (I looked at buying something from them, or one of the other shops in Oxford, but they didn't have much in this style — certainly not at that kind of price.)

Even without all the extras, the new bike is an improvement on my old three-speed in almost every area. The frame is aluminium, which means it's no heavier, even with the extra components. I bought the 47cm step-through ("women's") model: being able to wear long skirts aside (hardly relevant given the typical skirt lengths in Oxford), for a utility bike the convenience of being able to stand comfortably over the bike and the option of mounting centrally more than offset a little extra frame weight, especially if one may want a rear-mounted child seat. The handlebars are highly adjustable and the grips are more comfortable.

The Shimano Nexus 8-speed hub gives me a much broader gear range - 304% instead of 178% - especially at the bottom end (I haven't done a quantitative comparison, but 2nd feels lower than 1st on the old bike and it's now possible for me to spin slowly up Headington Hill). And gear changes are much smoother, whether shifting stopped or under load. (I have managed to disengage the hub while testing it, but only by changing down multiple gears while at high speed, which one never needs to do when one can shift while stopped.) Compared to a typical 21-speed derailleur chainset, this hub is missing maybe one gear at the bottom and two at the top: I might have missed having those once or twice in my first four months.

There's a standard set of front and back rim brakes, but the braking seems significantly better on the aluminium rims than the brakes on my three-speed, especially in the wet. And the front brake cable has some kind of built-in throttle that is supposed to stop dangerously fast braking, which I haven't tested either.

The dynamo lights mean never having to fumble around to find and mount lights, or forgetting them. (The Kettler page says both lights are halogens, but the rear one is actually an LED with a standlight; I'll probably replace the front halogen with something similar at some point.) The parking lock is convenient for short stops and offers some extra security, and is painless to use. And I'm totally sold on the suspension fork and seat post: there are plenty of uneven road surfaces and potholes in Oxford (and some of the routes the cycle tours use aren't surfaced), so the suspension makes for a faster and/or more comfortable and safer ride. Yes, all of those mean some extra weight, but this is a commuting or casual touring bike, not a racing bike, so comfort and convenience really take precedence.

Comfortable, reliable, designed for everyday use... something like this is surely the ideal commuting bike in Oxford as well as Copenhagen or Berlin. But, as others have noted, this kind of bike is actually extremely rare here: most of the bikes one sees have pannier racks and/or baskets, maybe 80% have mudguards, maybe 60% chainguards, and maybe 15% hub gears (mostly old three speeds, a few "Dutchies"). Parking locks, dynamo lights and suspension forks are extremely rare. Partly that's new students picking up whatever is left behind by those leaving — some of the bikes look and sound like they're about to fall apart at any moment — but there are plenty of working commuters who could easily afford a few comforts.

I'll update this review when I've done some real mileage on the bike; mostly I'm posting this in case anyone wants to take advantage of the Kettler sale. [Note: Unfortunately Kettler Dierct is no longer selling bikes in the UK, though they could be bought from German sellers.]

Town Bike Mark offers another review of the Kettler Spirit