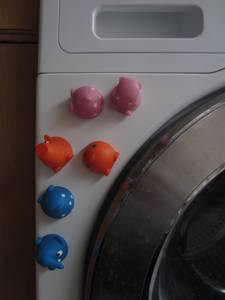 the pink magnet pair is "mummy",
the orange one "daddy",
and the blue one "helen"
(I don't know why)

It's just over two weeks since my last post on language development, but in that time Helen has:

Various sources suggest children may learn nine or ten words a day starting around this age, and that seems entirely plausible.