At first I was skeptical that Helen would cope with jigsaw puzzles, especially as she had a lot of trouble even with the little two-piece puzzles we tried her on first. But she's really taken to the two 24-piece puzzles she has - a zoo scene and an alphabet - and she's become quite proficient at them over the last two months. If awake and alert, she's capable of spending fifteen minutes or even longer working on them, and this morning she came close to finishing one in a single sitting, though she still needs verbal encouragement - "where is the rest of the lion?" - and occasional help if she gets frustrated with something or accidentally demolishes a chunk of the already completed puzzle. The amount of help we have to give her has steadily decreased: it's gone from her watching us doing the puzzle to us watching her doing the puzzle. 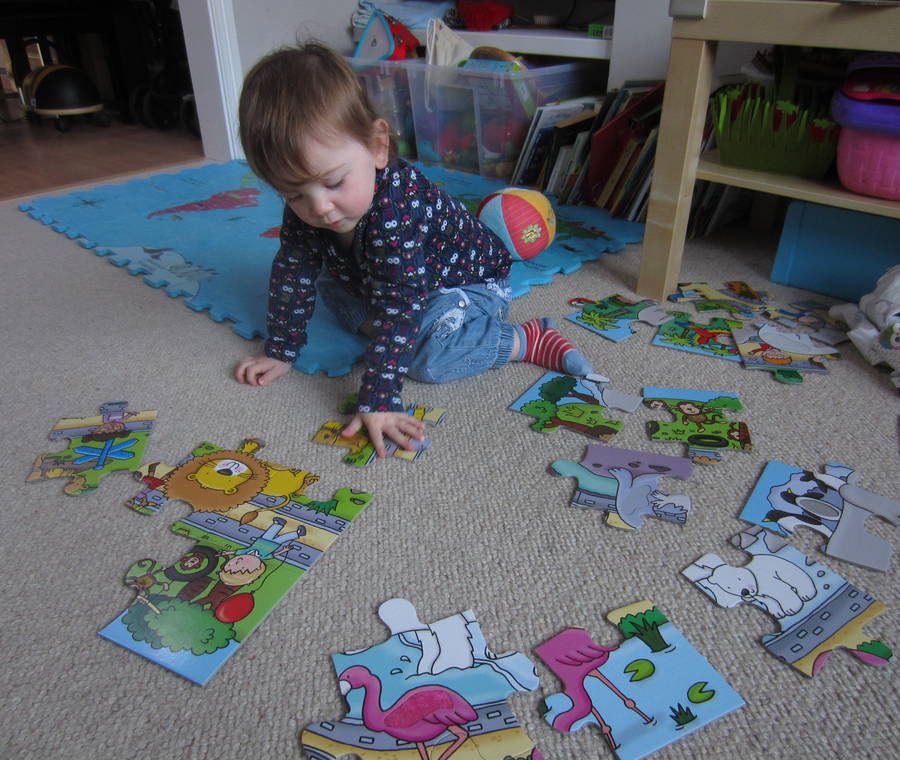 I started off using the picture of the puzzle on the box to show her where pieces went, but I'm not sure she really understood that (and the idea of a map seems cognitively quite advanced). Now she seems to have memorised "keys" to at least the easier of the 38 links between adjacent pieces - a girl's blue top that's divided across two pieces, for example. It's not clear to me how much she's acquired in the way of general-purpose puzzle-solving skills. She doesn't, for example, use the straight edge as a guide at all, though that may be because we've never trid to show her that. And she only rarely seems to make use of reduction to sub-problems, collecting say all four pieces that involve the polar bear before trying to put them together.

Unexpectedly, the final step of connecting one piece to another was a major bottleneck (hence even the 2-piece puzzles posing a challenge at first), a problem with fine motor skills that has largely been overcome, though it remains a source of frustration when pieces just don't click into place. And Helen still has a tendency to find the right piece and then try connecting it at ninety degrees. On the other hand, once she knows which piece she's looking for, she can scan the laid out pieces and sometimes find it faster than I can — though she's only just learned to turn all the pieces right-side up to start with and still doesn't understand that some pieces may be hidden underneath others (I have to uncover them).

(I wondered how much I was cueing her unconsciously, but on several occasions I've become engrossed in my book, looked up when she needed help or wanted attention, and found she'd done three or four pieces since I last looked at the puzzle, so I'm pretty sure she's not relying on me twitching when she does the right thing or anything like that.)

Update: we've given her a 48-piece dinosaur jigsaw puzzle, which she finds hard and needs help with — mostly in pre-sorting pieces into groups — but she's already putting pieces in it together unexpectedly. And it's a way of learning such essential words such as "parasaurolophus", "Quetzalcoatlus" and "triceratops"... 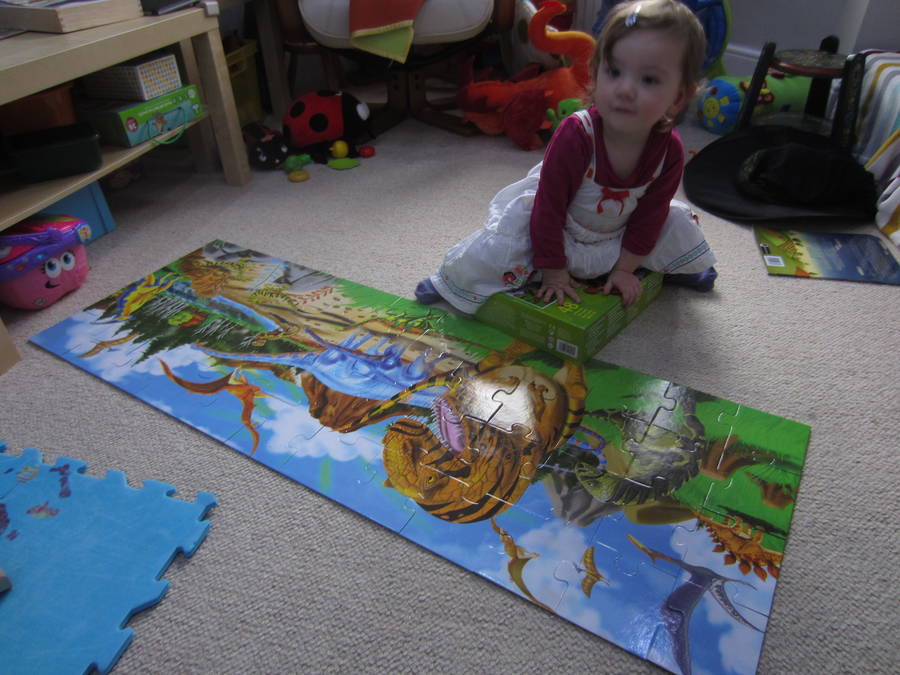