an extra day with Helen

I had had to take the day off work to look after Helen yesterday, since she was home after after having had the runs at nursery the day before. But we had a really good day. (While a 48 hour rule for keeping children home after diarrhoea makes perfect sense from a nursery perspective, she was actually quite well.)

I should in retrospect have cycled up the river, but we went our usual route into town and visited the central library. Helen picked out her usual Titchy Witch book — we've reborrowed these many times (the library doesn't seem to have the one book of the eight we haven't read) — along with a repeat Winnie the Witch book and three new books, while I found a copy of _Oddly_. I chatted briefly to the one other person in the otherwise deserted children's library, who had an infant who wasn't even crawling yet. Then we did some colouring in, with Helen self-occupied enough that I managed to read maybe ten pages of my own book! 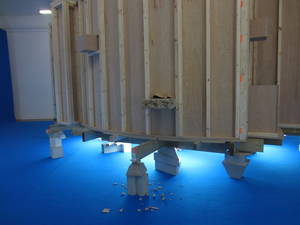 After that we went to Marks&Spencers, where we managed to find some shoes for Helen that seemed to fit ok and which she liked. Then we went to Modern Art Oxford, where we looked at the Anne Hardy: FIELD exhibition. As with many of these exhibitions, I'm not sure what Helen made of it, or indeed what I made of it, but we both enjoyed this one. And then we had lunch in the Modern Art cafe, which is one of our regular hangouts; some of the staff here have been recognising Helen since she was less than a year old.

After a stop to listen to a guitarist busking in Bonn Square, who played versions of Old MacDonald's Farm and Twinkle Twinkle Little Star for Helen, we got back on the bicycle and scooted up to my office in Wellington Square. There some magnetic jigsaw puzzles (which she did with some help from Rob) kept Helen occupied while I went through my email and did some housekeeping. There was some oohing and aahing over her from my colleagues, and I discovered that my department can give out an extra two days leave for dependant care. 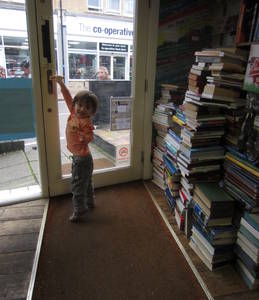 Then we walked/ran around to the Albion Beatnik bookshop. Dennis was off moonlighting as a tour guide, but I chatted to Sally, an academic who was minding the shop for him. I had a coffee and Helen and I shared a chocolate cake, and we read some of the library books we had borrowed. Then we ran around to the little playground in Jericho, where Helen tried climbing a rope ladder but eventually decided against. I would have come back along the river, but I knew Helen would fall asleep on the bicycle on the way home, which she promptly did.

Two years ago, looking after Helen on Wednesdays was rather stressful and felt like hard work: taking her out involved milk bottles and nappies and associated logistics, she couldn't walk and we were using a stroller and buses and so getting anywhere was hard work, and she couldn't talk, so it was hard to communicate with her. Now everything is much easier. I still carry a water beaker for her and some breadsticks, but could get away without those most of the time. And I carry a spare set of clothing (for accidents or overenthusiastic puddle-splashing) but have never had to use that.

These days it's more tempting to reorganise my working hours to have Helen two days a week than to go the other way.