I've just had my rear wheel rebuilt — with a new rim as well since that was getting worn, but largely to replace the hub. And this post is mostly about hubs, about whether getting a Shimano Nexus hub serviced is a good idea, and whether a premium "redline" Nexus hub is actually any better.

My bike (a Kettler Spirit) came with a Shimano Nexus 8 hub, one of the current SG-R831 models, and I had been very happy with that. It was a bit rough in 4th gear and rattled a tiny bit in 8th (more about this below) but was otherwise nearly silent: I could almost always hear the bicycle in front of me much more clearly than my own (though that may say more about the unmaintained rust-buckets being ridden around Oxford). And it was totally maintenance-free - I had had the shifter cable replaced, but had never touched the hub.

But I'd had the bike for three years and done over 4,000 miles on it (twenty miles a week commuting, plus other trips and a few thirty mile rides out of town), so I thought about getting the hub serviced. At Reg Taylor, the bike shop near home I use for most things, I was advised not to - the modern hubs didn't need it and might never be as smooth again if serviced. But at BikeZone in town, where I get work done when it's convenient to have somewhere near work, they recommended a service.

"In order to maintain proper performance, it is recommended that you ask the place where you purchased the bicycle or your nearest Pro shop to carry out maintenance such as greasing the internal hub about once every two years starting from the first time of use (or once about every 5,000 km if the bicycle is used very frequently)."

And a search online found people advising preemptive weatherization (admittedly in more inclement climes than Oxford's). Their example is of an older SG-8R20 hub, but "we still recommend an initial weatherization / overhaul at 1000 miles. After that, every 3000 miles or 2 years is fine. Daily commuters should have their hub overhauled once a year regardless of milage."

So in the end I had the people at BikeZone service the hub. This is not a full disassembly, but involves taking the cassette out of the outer casing, cleaning it out with oil, and then regreasing it (writeup with photos).

And, lo and behold, just as I had been warned, the hub was suddenly noisy: a slight noise whenever being driven, a bit like chain noise, but also a much more perturbing noise like gravel, or perhaps like a continuous chain change on a derailleur, when in 5th or higher gear. I wasn't terribly happy about this, and then the hub actually locked up on me - I pushed off one morning and my feet just stopped half way down. A bit of fiddling with gears and it was ok, and when I took it back they checked the indexing and took it on a test ride said it seemed ok. But then it locked up again, this time while I was at a gentle cruise. They reserviced it, and I used it for two weeks without any more lockups, but it still made the same noises and at this point I just didn't trust the damn thing.

Mine is of course just a single data-point. The people at BikeZone said they serviced several hubs a week and hadn't had anything like this happen (though possibly most people are less picky about their hubs making noises than I am) but from what they said it was also rare for them to see hubs that had died from not being serviced (though it did happen). So it seems like a trade-off between a small chance of a problem either way.

They said new cassette would be £170, but at Reg Taylor I was advised that it was better to get a complete new hub because a new cassette might not mesh so well with the old casing, since they wear together. So I bought a premium SG-8R36 redline hub, from a German shop online, which had been part of a wheel but was unused ("eingespeicht aber nie benutzt") for £80 including shipping, and had Reg Taylor rebuild my wheel with that (and a new rim).

The noises have gone away. There's nothing like the gravelly noise at all, and though there's still an almost imperceptible drive noise in 5th-8th, I'm thinking that might go away with wear-in.

The next question is, is it any better than the old hub? Is the SG-8R36 worth the premium over the SG-8R31? A description of the differences between the models contains this chart of the relative efficiencies of different gears. 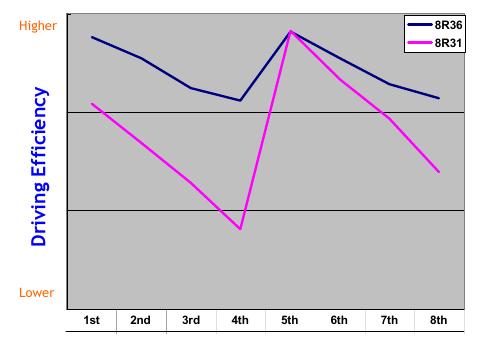 There's no scale on that, but the overall shape of the SG-8R31 curve certainly matches my intuition. I rarely used 8th, usually just spinning faster in 7th, and spent as little time as possible in 4th, staying in a slow 5th or dropping to 3rd when weaving around pedestrians and switching down to 3rd quickly when climbing. As well as being more efficient, the direct-drive 5th gear was also much smoother than 4th. (My actual praxis defied my theory here: for a long time I was under the misapprehension than 4th was the direct gear - because it's the gear the indexing is set in and is marked on the shifter - but that didn't lead me to actually use it much!)

I've only had the new SG-8R36 hub for a week or so, but some improvements are clear. Most obviously, 4th gear is now just another gear, which I can see myself using on a regular basis: it's definitely smoother, with no rough feeling, and (though I may have been primed to expect it from looking at the graph above) it seems significantly more efficient. There's no rattle in 8th now, and that may also be a bit more efficient, though it's hard to tell at those speeds. More useful to me would be improved efficiency in 1st, but it's hard to tell if there are any from the few runs up the hill to nursery (the only time I regularly use 1st).

It wouldn't have been worth rebuilding a working existing wheel just for these improvements. But given I was replacing my hub anyway, the premium model was definitely worth the extra €20 I paid for it. And if I were buying a new bike I might consider paying more for one with a better quality hub.

Given the SG-8R36 is a drop-in replacement for the SG-8R31, and none of the differences seem like they could actually cost that much, I'm wondering why Shimano keep the lower quality model at all. Is it just price-pointing, or is there perhaps some reason coaster brakes won't work with the more efficient design? (There's no SG-8C36 hub.)