Previously it was a fairly traditional lane, with a carriageway and pavements. The new design keeps essentially the same layout, only replacing the kerbs with gentle "gutters" or brick edging, on as far as I can tell exactly the same line, and changing the (still too narrow) footpaths to a "brick" surface. The other substantive change is that the street is now two-way for cycling (motor traffic is still allowed to enter only from St Ebbes).

The basic problem is that Pembroke St still feels like a road, albeit a more attractive one. Given its actual use, it should feel like a pedestrian area with a cycle path through it, a space in which motor vehicles are welcome only as temporary guests.

There are two major things I would do differently (obviously it's too late for Pembroke St, but similar thinking would apply when it comes to upgrade Catte St or any of the other lanes in central Oxford).

1. The carriageway should be narrowed so it is clearly a bicycle path first and foremost; it should also given a surface clearly different to that of the main roads (St Aldates) to which it connects - this could be some kind of standardised blue or reddish brown "cycling" colour (except that neither the UK nor Oxford(shire) appears to have any standardisation here). The pavements/footpaths should be correspondingly widened.

This would serve two purposes. Firstly the space would no longer look at all like a road, discouraging lost tourists from driving into it at all and encouraging loading vehicles to drive slowly (the speed limit could also be dropped to 10mph, and the street could be marked "access only"). Secondly, pedestrians would have more space on the "pavements", and so would rarely need to enter the central "carriageway/path", making pedestrian/cyclist conflict less likely and priority clearer. 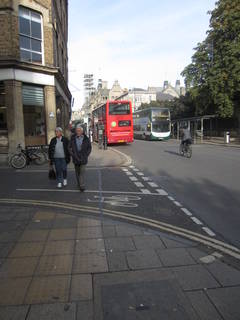 10.30am in November, so not crowded - those bus-stops are completely jam-packed in peak hour, or tourist season

2. The pavement on St Aldates should be continuous across the entry to Pembroke St. St Aldates carries a colossal amount of foot traffic, so pedestrians here should have clear right-of-way over the occasional motor vehicles needing to exit Pembroke St, and over people cycling. This would also, by breaking carriageway continuity, help to distinguish Pembroke St from a normal road (There should be something similar at the other end, but really St Ebbes should be given the same treatment, and the change in surfacing should come at the entry to a much larger pedestrianised area.)