I got most emotional about Helen leaving preschool three days before it happened. When I took her to nursery on Monday, we found that her name tag had already been taken from her bag hook. When I picked her up in the evening, she was in the big garden along with everyone else; she'd had a good day as usual, her teacher Sarah told me. She came running to me and told me that she'd been playing with Tara all day, and that it was Tara's last day. And Tara came over and she and Helen had a big hug.

After Helen had waited patiently for Sarah to finish a conversation so she could hand her bib back — the preschoolers wear blue bibs, the next younger ones orange — she told me she wanted to give Tara a card. (We had given leaving cards to Helen's four closest friends, so Tara had just missed out.) I had to explain that it was too late, as Tara wouldn't be there tomorrow. And then she said "But Tara could come to my house, or we could go to hers" — and I had to confess that I didn't have contact details for Tara's parents (she's the closest of Helen's friends we never made family contact with). And then when we were leaving, Tara came to the garden door for a final wave goodbye through the glass, and it occurred to me that (because of nursery policy) we don't even have any photos of Tara.

She didn't get to go to Headington Library, but Helen did get her last yoga class on the Wednesday. On her final day on Thursday, I think Camilla got more emotional than I did. We gave a card to the nursery and they gave us one, and we had a chance to say goodbye to the teachers we knew best, to Oumou and Sarah and Wayne. And Sam and Emma (Emma Boyce, Helen is careful to make sure I understand, as there were three Emmas in preschool) finished on the same day, so Helen had two peers to play with and to have the leaving song sung to along with her. So I think her day was ok, but she was also a bit shaken: we went out to dinner with a friend who was visiting Oxford, and Helen had an unusual melt-down about coming home with me and leaving Camilla to catch up with her old colleagues. (Possibly we shouldn't have mentioned that she hadn't seen one of them for five years, and might not see another again for several.) 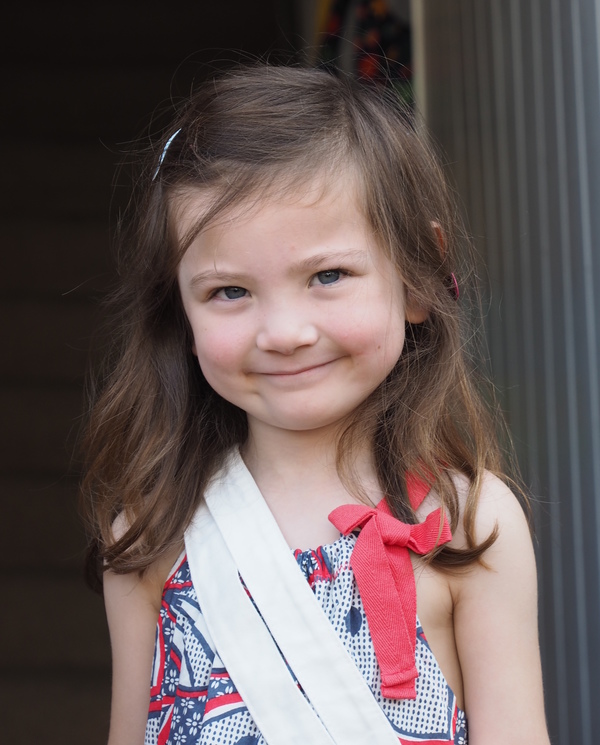 Thank you to everyone at Julia Durbin. Thank you for the cuddles and hugs and good mornings, for the lunches and teas and snacks and milk bottles and bowls of fruit, for the nappy changes and bottom wipes, for the emails and phone calls, for the clean floors and tidy gardens, for the books and stories and lessons, for the yoga classes and Whoops-a-Daisy-Angel, for the games and crafts, and for everything else.

I am so glad we're taking a week off to go to France before school starts, otherwise Helen would be facing a whole week with all her peers gone, and with her teachers busy dealing with all the three year olds newly moved up to replace the school-goers. (Talking about it two days later, Helen remembered her first visit to preschool with Aadi and Thea, and how they played with the big children.) And to end this on a positive note, we've managed to fit in meetups with four of her friends since they've left, so she knows that Aadi and Aimee and Martha and Ruan at least are still there.

Putting this in a broader perspective, I don't buy the idea that children are unaffected by this kind of social disruption. Sure, they can cope with it, especially if they have a stable and secure family behind them. (We moved from Sydney to Oxford, so we have some experience of this as adults, but going from seeing friends every few months to seeing them every few years or so is not the same as going from seeing them four days a week to potentially never seeing them again. Also, social media and email make a difference these days -- and perhaps make the idea of losing all contact with someone close more shocking than it once was.) Even after a month with no contact with friends, when we went to Australia, or they went on holidays, Helen was regularly using them as reference points: "But Aadi says..." or "Aimee and me ....

Having close relationships with a group of forty odd adults and other children is probably relatively "normal" for children, or at least historically and culturally common, whether in hunter-forager bands or settled villages. (Though the children would be mixed-age, and the adults would include extended family members.) But being translocated between such groups is probably not: the impression I get is that that pre-modern long-distance mobility didn't involve children so often. And having such communities nearly completely broken up -- with thirty odd children scattering to more than a dozen schools -- is, if you think about it, quite a strange phenomenon.

She remembered the Julia Durbin birthday party (for the nursery itself) a year and a half ago, when she came second in musical chairs and won a pink-handled skipping rope (Ruan came first and got a trophy) and then got a green-handled skipping rope in pass-the-parcel. (Some of the groups didn't have chairs, so had to play musical statues.)

She also remembered that one day she and Aimee tidied up the entire pre-school room while everyone else was still outside. She got a round purple sticker for that and Aimee got a yellow star sticker.

These memories may have been prompted by the physical objects — she still has the purple sticker, stuck onto the inside of a red bottle cap, and the pink skipping rope — but there's a surprising amount of detail in them. (A year and a half ago doesn't sound like much, but she was still three then!)

Helen has also mentioned Aadi a couple of times recently. We caught up with him and his family at the Farmers' Market, and with Aimee at Flofest.

Update (May 2020): she still has the bottlecap and remembers it's special to her.