<- Oxford is a boiling frog, its transport stuck in a steadily worsening local optimum
graded readers ->

reading at five and a half

An update on Helen's reading, following on from reading at five.

Helen is now capable of reading entirely by herself for extended periods. One evening I took her to my gamelan rehearsal, gave her two Mr Putter and Tabby books, and there wasn't a peep out of her for fifteen minutes or so while she read those. And she can now sit next to me and read, asking for help occasionally but not so often I can't do some reading too. She also reads books with her friends sometimes.

We've started with books she's familiar with because we used to read them to her. So she's read the Titchy Witch stories (Rose Impey), most of the Frog and Toad stories (Arnold Lobel), the easier Dr Seuss books, and all of the Mr Putter books (Cynthia Rylant) we have. 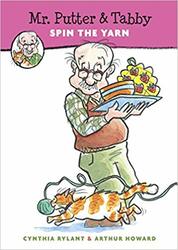 For those of you who don't know the last of these, they are a lovely series of books about the retired Mr Putter and his cat Tabby, and their neighbours Mrs Teaberry and her dog Zeke. They find excitement in everyday events, without catastrophes or magic or indeed anything adventurous. And they are notable for having ordinary elderly people at their centre and only incidentally involving any children.

They are also really nicely written and illustrated, and are among the select number of books this simple that (at least for me) survive multiple re-readings. We've only read eight or so of the twenty books in the series (the Oxfordshire library system only has two, unfortunately), but I'd actually like to read the others myself!

Helen has also read several of the Mirror-Belle books (Julia Donaldson), though these are a bit long yet. And she's started working through a thirty-book Walker Stories set: these little books provide good motivation, and she's now capable of reading one of them in a sitting, with a bit of support. 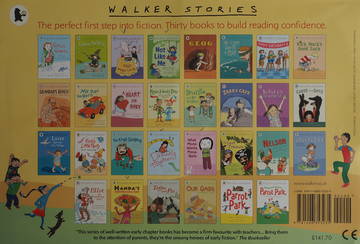 I thought this Walker Stories set was such a good deal when I found it on sale that I bought two extras and we gave a book from them to everyone in Helen's year at school. It's an excellent collection, much better to my mind than the big Usborne collection we drew on for Helen's party bags, or the Oxford Reading Tree readers Helen is getting in school (though to be fair those are more constrained linguistically). Although the books were clearly commissioned — they are all about sixty small pages long, with a three-chapter structure and a similar vocabulary level, and address social/emotional development themes — they are written by accomplished writers and illustrated by first-class illustrators (albeit in black-and-white).

With non-fiction, Helen has read most of a Walker ten-book Nature Storybooks set, which is beautifully illustrated and has a good amount of text for her. (Based on my experience with childrens books, anything published by Walker is likely to be pretty good.)

Books I've read to Helen since the last update include Roald Dahl's Matilda and The Witches, Neil Gaiman's Odd and the Frost Giants, and J.R.R. Tolkien's The Hobbit. We've also reread the Lupton/Morden Adventures of Achilles, and Helen listened to Benedict Flynn's The Tale of Troy on the plane on the way to Sydney. 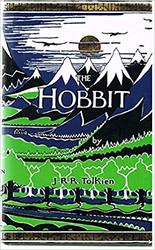 Having read The Lord of the Rings first myself, I never thought that much of The Hobbit, but reading it to Helen has led me to appreciate it much more.

The language is lovely, and the story has a regular rhythm of tension and danger followed by resolution and relaxation which worked well with an imaginative and sometimes fearful child (she baulked a little at the obvious dangers, but more at the emotionally charged moments, such as when Bilbo makes off with the Arkenstone). The vocabulary is in some ways advanced — I had to look "glede" up myself, as the last time I encountered that was probably the last time I read the Hobbit myself — but they're (mostly) useful and powerful words, well worth explaining as necessary.