I never did end up running any kind of pre-school maths circle, and once the children started school there hasn't really been spare time in the week for such a thing. But some of my thoughts about teaching mathematics from two and a half years ago have progressed.

One of my principles is to try to avoid things that will be covered in school. I can't see any point at all in introducing Helen to the times tables, for example, given she's going to have three years or so of school drumming those into her head. Mostly mathematics is something that comes up in other contexts — distances on maps (which Helen is getting the hang of), sharing things fairly, recipes, and suchlike — but we've done a few things that are less direct.

Helen is enjoying playing with Steve Wyborney's subitizing slides. This will lead us, I think, back to number partitions (which we played with a bit when she was very small, using a peg board) and combinatorics is full of fun stuff.

Helen loves the Kaleidopaint app (by Manuel Weeks, the author of The Shape of Space), which allows free drawing with the imposition of one of the 17 plane symmetries. And she has learned to impose symmetry on some of her Hama bead creations. I've just started reading The Symmetries of Things with her, so we can learn names for the plane symmetries and maybe start exploring their structure. 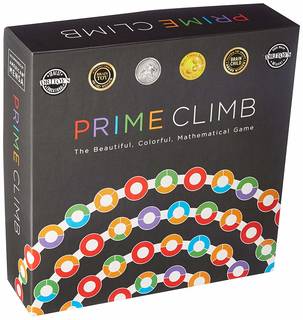 over-priced for what it is, but a nice conception

Instead of times tables, I've taken up my idea of teaching the multiplicative structure of the first hundred or so numbers backwards, with a factorisation-first approach. Helen learned numbers looking at house numbers as we walked around, and now I try to do on-the-fly factorisation of them (I actually find this quite hard, and not just because we walk faster now). I don't know if she's really got the idea, but it keeps me entertained — and we haven't got to the "this weird man chanting '84 is 2 times 2 times 3 times 7' isn't anything to do with me" stage yet. We also have the game Prime Climb; we make up our own games using the board, as the rules that come with it are a bit tricky yet (it says 10+ on the box, which is probably roughly right). Other games Helen really likes that have a mathematical element to them include the card games Rat-a-tat-Cat, which involves basic probability calculations, and Sleeping Queens, which involves finding addition equations using the numbers up to 10 and doing sums up to 50 of multiples of 5. And there are puzzle games like Little Red Riding Hood. (I'd like to find some good 3D puzzles, since I've always felt I lacked good three-dimensional geometric intuition myself.)

Next: Mathematics at Six: apps and games