<- mathematics at six: apps and games
a tiny bit of German ->

The computer I had used for the last nine years was built when we arrived in the UK, but was a clone of the computer I had had in Australia and was effectively over a decade old. I was running out of space (though much of that was cullable video) and when my existing storage produced some errors (some flagged by btrfs, others by read errors on my rsync backups), I decided it was time for an upgrade. With some advice from colleagues at work — I'm not really a desktop hardware person — and PCpartpicker I came up with the following:

These parts were sourced from ebuyer and Amazon, for a total of £528. On top of that I bought a pair of 1TB SSDs for another £206, largely so I could do a complete copy of the existing system and debug any potentially failing disks at my leisure.

I picked the case because it is good quality — there's a user community and spare parts can be purchased — compact, has quiet fans with a built-in controller, and will fit six disk drives (as well as being my desktop, the system doubles as a media fileserver). The power supply was picked because it is quiet and semi-modular. The motherboard choice was constrained by the case (mini-ITX) and the need for six SATA ports and an M2 slot. I don't do gaming and if I have to do any cpu-bound scientific computation I'll probably be using an HPC cluster, so the slowest current processor was fine and I didn't need a graphics card. In contrast, the snappiness of a lot of operations is limited by memory and disk io, so I upped my current 8GB of memory to 16GB and went with the fastest core storage that wasn't stupidly expensive. There's no room for a DVD drive, so I'll get an external one.

The build was fairly straightforward, with just a bit of jiggery-pokery getting the motherboard in. The case is tiny — it's under 20 litres in volume and looks like a microwave, only smaller — but the resulting system is not that cramped, perhaps because I don't have a GPU card and only have two 2.5" drives in there so far. (The motherboard came with two SATA cables, but they were unnecessarily long, so I ended up getting shorter ones.) 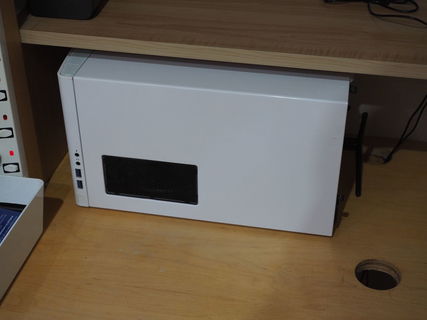 The resulting system is really quiet. The case comes with its own three-speed fan controller: on high (presumably to cool a fancy graphics card and an overclocked i7) it's pretty noisy, but on low it's noticeably quieter than my old system, barely audible even when it was temporarily sitting in the bedroom at night. It fits under the shelf behind my monitor, where it is about as loud as my old computer was under the desk. Air flow might be a problem here, but I'll monitor the cpu temperatures and see how that goes. (And if it's too noisy I will replace the stock CPU cooler.)

The faster CPU and disk (the old system had a core 2 duo and a slower SATA SSD) are clearly noticeable. With the caches cleared, a full rebuild of my book review site — reading 1500 source files and outputting 2000 pages of html — used to take 15 seconds but now takes 3.

If testing reveals they are ok, I will move the raided 1TB spinning pair from my old system across. That would leave me with two drive slots (and SATA connectors) for expansion — and, since I don't have a graphics card, I could use an adaptor to put a second M2 SSD in the PCI express slot. (This might also simplify my filesystem layout, but that will be the topic for a separate post.)

Update: Taking the two 3.5" drives out of my old computer proved a real pain, taking twenty minutes or so. The new Fractal Design case is much, much better than the old Antec case (which I notice has been discontinued).
Update 2: The noise was a little bit annoying. It was mostly coming from the stock Intel CPU fan, which wouldn't PWM slower than 1050rpm. So I replaced that with an Arctic 12 — for all of £9 — and now the CPU fan runs at about 600rpm when the system is unloaded, and I can just hear the case fans. When I stress all four cores, they reach 55° and the CPU fan speeds up to about 1150rpm, but that's quieter than the old fan was at 1050rpm! (I've also found a "ThermalCruise" setting on the motherboard, that stops the CPU fan entirely unless the CPU temperatures reach 50.)

If I wake up the hard disks, they're much louder than the fans. And the higher-pitched humming I could still hear on top of the just audible whoosh of the case fan turned out to be the monitor! (Fixed following advice from Silent PC Review.)