<- reading at 8½
Cowley Rd is a disaster zone for cycling ->

The shortest route — about 3.2km — is along Cheney Lane, down Headington Rd, through St Clements and the Plain, along High St, and then using Bear Lane and Pembroke St. Using Morrell Avenue instead is marginally longer (3.3km) and some routing software suggests that and East Avenue and Cowley Rd (3.5km) as a quieter route. And if I'd been by myself I'd have used one of these options (I've never cycled up Headington Rd, but going down I can take and hold primary position and not get close-passed). 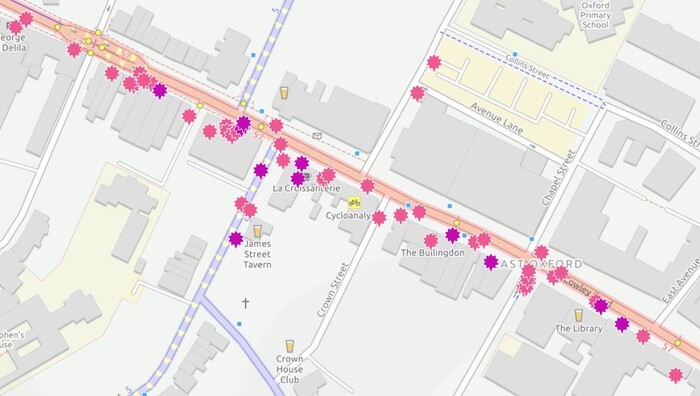 Cycling with an 8 year-old, none of these routes seemed at all appealing. Cycling on Morrell Avenue or Headington Rd would either have involved the two of us holding primary position while doing 8mph (her likely speed, even downhill) and being abused by car drivers, or being shunted aside and being close-passed multiple times while in the door (or lamp-post) zone. East Avenue is great (it's a long-standing LTN) but Cowley Rd is appalling for cycling, with cars turning in and out of side-streets, cars parking (often dangerously and illegally), door zones, buses blocking visibility, and often unpredictable pedestrians. And I've only cycled with Helen through the Plain on weekends, and only going from Iffley Rd to Magdalen Bridge, which is one of the easier movements. 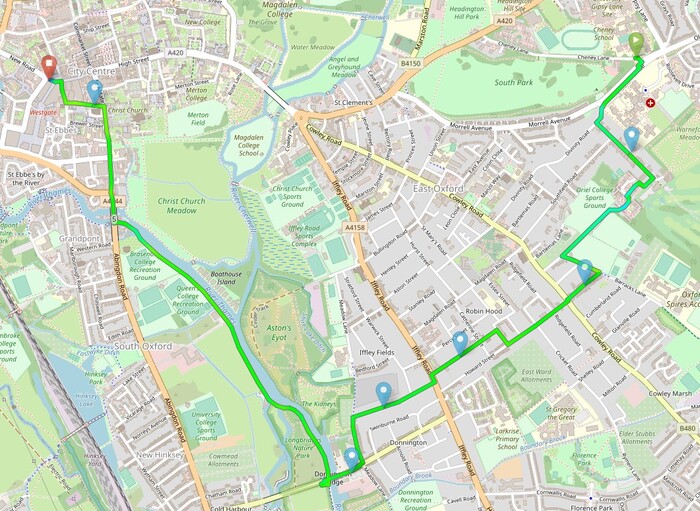 backtracking via the river (6km)

One alternative would have been to reverse the way we'd got to Cheney, back along Warneford Lane, the top of Divinity, then Hilltop and Bartlemas Close and Kenilworth Avenue back to Howard St, then take our usual route along the river to get into town. That's 6km, so would pretty much double the distance we had to go. (It also has some problems: the worst bits are Warneford Lane - where I'd just been stupidly closely passed by an SUV on the way to pick Helen up - and the top of Divinity, and crossing Cowley and Iffley Rds is always stressful.) 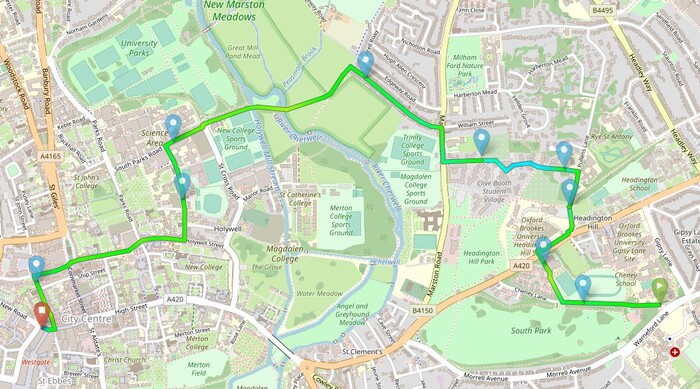 What we actually ended up doing (after another parent gave me some advice) was to cross Headington Rd using the Brookes footbridge, use the pavement to get to Pullens Lane, and then use John Garne Way and Ferry Rd to get to the Marston/Peasmoor foot/cycle track and then the city centre. Again, there's a lot of this route that's not great. The footbridge and pavement were fine out of term time, with hardly anyone around, but are too narrow and not designed for cycling, and access from the south is awkward, involving either a narrow shared foot-cycle path around the oval or bumping the bikes around the gate to the residential village. There are also two stretches of busy road: Marston Rd from John Garne Way to Ferry Rd (the worst bit of the route, with parked cars and 30mph traffic) and South Parks Rd from the cycle track corner to Mansfield Rd.

Having a recreational trip increased in length/time by 50% or even 90% may not be so bad (though such increases push some trips beyond the stamina of younger children). But this is the kind of rerouting which deters people from either commuting or making everyday trips by cycle. Until and unless there are comfortable, safe, direct and coherent routes between East Oxford and Headington, and between both and the city centre, there's no hope of getting significantly broader uptake of cycling in Oxford.

Update: I'm not the only one with this kind of experience.

I didn’t allow my son to cycle to school until he was 16. He caught the bus rather than negotiate St Clement’s & The Plain. The near misses which he did have by bike were on the London Rd off road cycle track when some Headington Prep parents nearly mowed him down.