Oxfordshire's cabinet recently adopted a "decide and provide" approach for transport planning, but that doesn't seem to be informing the plans for the traffic filters in the Central Oxfordshire Travel Plan. The St Cross traffic filter and cycling on Magdalen Bridge provides one example of this.

Among the goals decided on in the Local Transport and Connectivity Plan are:

For these goals to be achieved, changes are needed at the Plain and the Longwall-High junction which will be impossible with the current plans for the traffic filters.

Magdalen Bridge is the second busiest cycle route in the entire country, but that is because it is an unavoidable bottleneck, not because it is a safe and accessible and attractive route. The junctions at either end, at the Plain and where Longwall St meets High St, are a major barrier to cycling, rendering the route unusable by most children and a majority even of adults. The following quotes are typical of comments I have heard over ten years of talking to people about whether and where they cycle.

"My kids cycle all over East Oxford, but I can't take them into town by bike because I won't risk them in the traffic around the Plain and Magdalen Bridge."

"I'm in that two-thirds who don't feel safe cycling in parts of Oxford. And yet, I'm not an underconfident cyclist: I cycle happily from Marble Arch to Tottenham Court Road in London on a regular basis and don't feel as threatened in central London as I do in central Oxford. I will not cycle the 7km from my home to my mother's house on the Botley Road, or the 4km from home to the Westgate because I don't feel safe on the roads."

No "comprehensive cycling network" is possible in Oxford without changing this situation — and this route alone could plausibly provide 5% of the county-wide target increase in cycling trips. The collision and injury concerns at the Plain are obvious and have high salience following Ling Felce's death; the Longwall-High junction is not so bad, but still generates roughly one serious injury a year.

Unlike bus decongestion, these problems for cycling can't be fixed just by reducing traffic. That requires a qualitative change: the redesign of the two key junctions.

The Plain is more complicated, but at the Longwall-High junction the space constraints quite clearly require operation without a separate motor vehicle right-turn lane to provide for safe and accessible walking and cycling. And that is only feasible with very low amounts of motor traffic on Longwall St: local buses and (perhaps) taxis. A "decide and provide" approach would, therefore, put in restrictions on St Cross necessary to achieve that level of traffic: a traffic filter without exemptions for vans, private cars, mopeds and motorcycles, or (especially) HGVs. 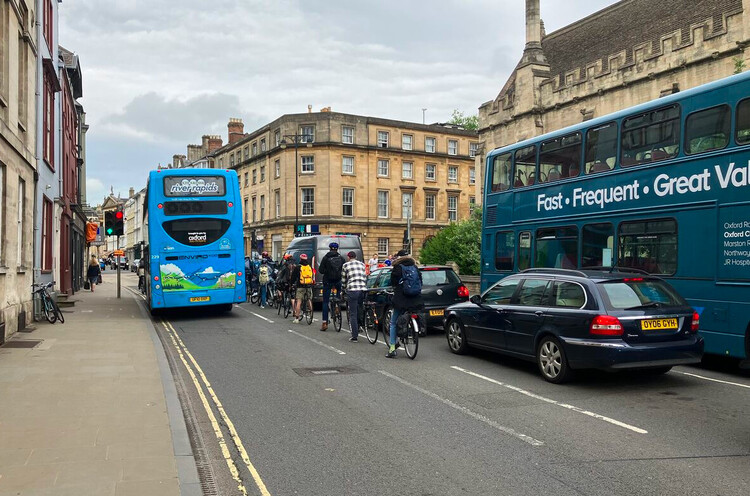 If — as officers told me during a consultation meeting — enforceability and signage/legibility make having different rules for different filters problematic, then I suggest putting a bus gate on St Cross, with the same rules as the one on High St, instead of a traffic filter. Apart from the status of Magdalen Bridge as a bottleneck, there are other ways in which the St Cross filter is different. Longwall St is entirely unsuitable for HGVs, even less so than any of the other filtered routes. And the main reason for exempting mopeds from the traffic filters is to avoid them having to use the ring road, but barring mopeds from St Cross would only push them out to Marston Ferry Rd, not to the ring road.

With the grant of "Safer Roads" funding for the A420 and A4158, the opportunity to rebuild these junctions may be imminent. The St Cross traffic filter could of course be modified when that happens, but reopening such a controversial scheme is likely to be fraught.

Another example of a failure to "decide and provide" is with the Hythe Bridge St filter, where the goals surely include providing a safe and accessible east-west walking and cycling route — an essential component of any active travel network — and creating a "public gateway" to the city centre on the approach from the railway station. But there is no way to expand the entirely inadequate footways on Hythe Bridge, let alone put in cycling infrastructure, while maintaining two-way motor traffic flows. This route can only be made active travel accessible with all motor traffic except emergency vehicles excluded from Hythe Bridge (some private motor traffic could be routed via Park End St, along with the buses). Reducing peak motor traffic flows on Hythe Bridge by even 30% would make cycling this route only slightly better, while bringing almost no improvements for walking or for the public realm. Qualitative improvement is possible here, but it requires measures that allow space reallocation.