After a couple of months with the activity monitoring apps on my iThing, I've averaged about 4km a day of walking and 12km of cycling.

With an easy 500m walk to school instead of the 2km to nursery, my daily averages are now more like 3.5km of walking and 7km of cycling.

The walking numbers are a bit exaggerated by some of the cycling (notably bumping across Warneford Meadow) being double-counted as walking, but on the other hand don't include walking around inside. On a normal day it's a bit shocking to realise I walk less than 2km, but that has been augmented by walking Helen to nursery once or twice a week (2km there, so a 4km round-trip for me) and the occasional country walk (5 to 7km). Also, whenever we go on holiday we usually end up walking quite a bit: we managed nearly 8km a day in our recent week in France.

[It should be trivial to write a script to delete walking data from the built-in Health app that overlaps a Strava cycling trip, but that's the kind of thing the crippled iOS environment makes pretty much impossible, as far as I can tell.]

Most of my exercise over the last year has come from cycling the nursery drop-off and pickup, which brings my total daily commute to about 13km, including two climbs of Headington Hill (Bartlemas Close and Morrell Avenue). Now Helen is going to school, I will add maybe a kilometre a day on average, since home to school return is 1.2km and I'm doing half the dropoffs and pickups, but walking short distances on the flat isn't going to give me anything like the aerobic workout of the hill climbs on the bike. 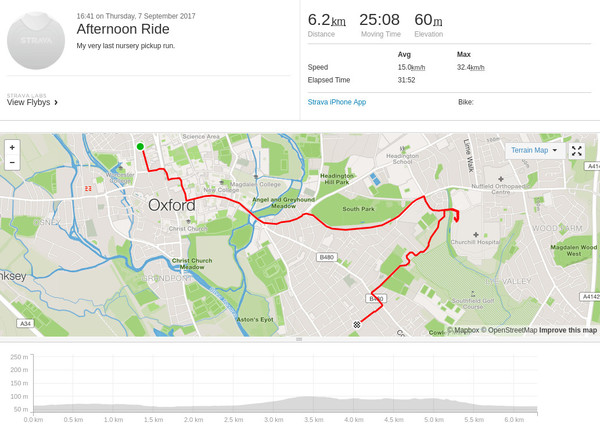 The walk to Helen's school feels like nothing and I'd never have guessed it was as much as two thirds of my own primary school commute. That was only 900 metres, looking at Google Maps, but felt like a long way, perhaps because I started doing it relatively young. (Definitely by age seven and a quarter, along with my younger sister, since I remember having to get someone to ring my parents to pick us up when I started coming down with terrible headaches every second day from malaria, after a trip to Papua New Guinea in December 1976. I'm pretty sure no one is going to let Helen walk home at seven these days, even on a shorter route with fewer road crossings.)

Just tracking my daily exercise is making me walk a little bit more during the week: walking rather than cycling to lunch, and choosing places to eat a little bit further away.