On Saturday I went on a tour of the Waltham Forest "mini-Holland" project, organised by CyclOx and hosted by the WF branch of London Cycling Campaign (thanks Paul and Dan!). We caught a mini-bus into London, then used Urbo dockless hire bikes to do a 14km loop around the borough, looking at what they've done and are doing. (These are my impressions of the project, based both on what I saw and was told. For anything official, see the Waltham Forest "Walk Cycle Enjoy" site.) 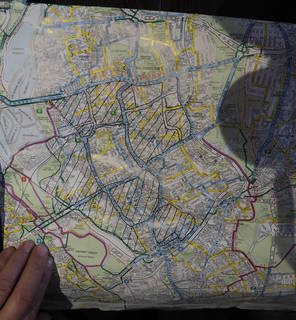 Paul's map: the hatched blocks have been filtered

This was a huge project. Geographically it covers most of the southern half of a borough of nearly 400,000 people (see a Google Maps overlay showing what has been done). Financially they got £27 million as one of the three mini-Holland schemes funded by Transport for London (one of the few useful things Boris Johnson did, can we please make him minister for cycling?) supplemented by e.g. Community Infrastructure Levies and Section 108 funding to reach £45 million. (They also managed such things as getting Network Rail to pay for a road bridge to be bollarded and prettified because it would have cost them more to make repairs to the aging bridge to make it safe to carry motor traffic.) They were originally given three years to complete the project, but TfL realised that was unrealistic and the timeframe is now the six years 2015-2021.

The mini-Hollands seem originally to have been pitched as cycling schemes, emphasizing cycling routes, but the Waltham Forest implementation is very much as an active travel project. Many of the interventions involved are only secondarily cycling-related: they have, at least from what I could see, so far largely benefited people walking. And it's broader even than active travel, since there are also obvious benefits from reductions in noise and air pollution. This approach has been central to getting popular support, and community involvement has been central to the project. I think our guides said 10% of the money is going on community engagement — informing residents of plans, running consultations and getting feedback, and so forth — and they had specialists, some of whom had worked on the Olymics, involved.

Politically, the project was driven right from the top. The deputy mayor was a key advocate and the head of the borough highways unit was directly responsible, not a separate active travel unit or cycling officer (the borough does have a cycling officer, but they deal with things like bike parking provision). This is such a large project that the reputation of the highways chief rests on it. (We also saw some examples of quite decent separated cycle tracks from twenty years ago, so the borough has some history of trying to properly provide for cycling.)

Turning to the actual interventions, these seem to be of three main kinds. The first was modal filtering of residential areas. Here large blocks, half a square kilometre or so, have been treated as a single unit, with road closures and one-way restrictions used to prevent all through motor traffic — in one block thirteen closures were needed. (One or two individual closures were abandoned due to failure to get local support; some only scraped through.) We stopped outside one primary school, on a road (Pretoria Ave) which used to be a rat-run carrying thousands of vehicles a day and which was now dead quiet. (Admittedly we were there on a Saturday, and there must still be some school run traffic, but otherwise it would only be residents coming and going.) What drivers we did encounter in these areas were all patient and polite; as I've noticed elsewhere, residents usually are.

This was actually the first time I'd used a dockless bike. The Urbo bikes were unlocked for us, so we didn't have go deal with the payment process and I can't comment on that, but bikes themselves were mostly ok, if a bit beaten up. (Mine might have been one of the better ones, the gears needed reindexing on some of them, and on one the chain guard came off.) They are three-speeds with dynamo lights and roller brakes; the seat height was easily adjustable, otherwise I didn't touch anything. I never used gear 1, as there were no major hills. It was starting to get uncomfortable towards the end, and I wouldn't recommend an Urbo for long rides, but for the more likely trips up to 5km they would be just fine. 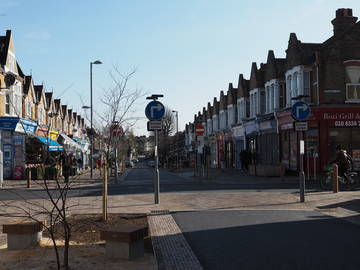 Another intervention was place-making, filtering/reduction of traffic on high streets. As well as blocking or drastic reduction of through traffic, this has involved the removal of parking and a general expansion of space for people. Orford Rd is the best known of these, and that was where we had lunch, but we also looked at Francis Rd, which used to be a busy B road but is now impossible to use as a through route. (This had only been done a few months ago and we saw two drivers who were clearly confused, either on their first visit since the changes or using satnav systems with outdated information.)

We saw quite a few people other than us cycling, but not (by Oxford standards) large numbers. The bigger benefit of both filtering interventions seemed to be in general amenity, for people walking around, pushing prams, sitting around enjoying the brisk barely positive temperatures, and in things one can't see such as reduced noise and air pollution. The demand for parking suggests bicycle use is on the rise, though.

The final interventions are the separated cycle tracks on major roads, most notably the Lea Bridge Rd, where 4km of track is costing £15 million. The stretch we cycled was good enough to make cycling along a very busy A road comfortable, but also good enough that one noticed the less convincing bits: sometimes the track (and footpath) had clear priority over side roads, sometimes not; and sometimes there was a buffer to the carriageway, sometimes not. These are the kind of thing that might make parents nervous about eight year olds on some of this. (SRN Interim Advice Note 195/16 recommends 50cm separation with 30mph traffic.) On the plus side, it never just "gave up" when it hit somewhere difficult. (We turned off at the junction with Orient Way, where they are going to implement one of the UK's first "green scrambles", a simultaneous all-directions phase for pedestrians and cyclists, allowing connection to a new cycle bridge being built between the existing bridge and the station.)

The provision of bicycle parking seemed quite decent. The high-street schemes have incorporated some, as have some of the road closures; there are marked parking areas for dockless bikes in thirty key locations. (We left our bikes on one of the now filtered bridges over the railway line.) We also saw quite a few on-street bike hangars, and had a look inside the large bike parking facility at Walthamstow Central. This is not Utrecht, but apparently the first facility filled up immediately so they built a second bigger one! This is much nicer than any of Oxford's parking facilities, though admittedly on a smaller scale than the bigger ones (such as the railway station and Broad St).

First of all, it's not clear how Oxford could get the kind of political engagement Waltham Forest has. Perhaps the central problem is that Oxfordshire County Council, which controls the roads and most of the other infrastructure necessary to implement changes like this, represents large numbers of people working in Oxford but living outside, for whom shaving a few minutes off a daily commute is more important than improving amenity and livability for residents. It's not clear how we'd get funding on this kind of scale, but that seems secondary to the political problem: Waltham Forest was ready to apply for the mini-Holland funding when the chance came.

A large project with political engagement allows connected and coherent planning: here when S108 or CIL or Cycling Ambition money becomes available, it gets thrown into isolated projects of often dubious benefit, rather than being used to expand a coherent city-wide scheme. There are economies of scale, too: a six-year project proceeding at a steady pace can put together and maintain a community engagement team vastly better than anything that can be scrambled for individual small projects.

There are also significant geographical differences. Waltham Forest is not a tidy grid, but it's at least grid-like, with a network of major roads and nothing like Oxford's radial structure. The surrounding green space — the reservoirs and Lea Valley to the west and Epping Forest to the east — is more like the Oxford Green Belt than the internal barriers within Oxford. Oxford needs drastic change in its city centre, of a kind unlike anything here.

Natural barriers have effected filtering of some Oxford residential areas already: there aren't really through routes in Iffley Fields or the Lye Valley. (But these barriers often block walking or cycling too: where is the route from Lye Valley to Barracks Lane, for example?) And some modal filtering has been done: Union and East Sts in East Oxford, for example, and the block between Kingston and Hayfield Rds in North Oxford. But more could clearly be done here: Cornwallis Rd, Cricket Rd, Marston's Oxford Rd, Jack Straw's Lane, Hurst St, and so forth are all candidates for filtering. As far as high-street place-making goes, Walton St and Cowley Rd seem the obvious candidates, with the first being a much easier proposition. And Oxford has finally seen some separated cycle tracks appearing, on the Slade, but the implementation is inconsistent and often deals poorly with side roads and junctions. We badly need this done, properly, on all the radial routes.

A big thank-you to CyclOx for organising and funding the tour, to Paul and Dan and the Waltham Forest London Cycling Campaign for hosting us, and to my companions for good company and conversation.