Camilla and I, joined by Camilla's colleagues Rosalind and Madeleine, drove to Kent to visit Charles Darwin's home, Down House. 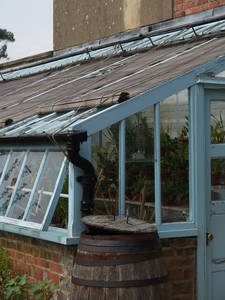 We started with tea and coffee, as some of us were caffeine addicts, then went on the noon tour of the garden. There are some modern replicas of Darwin's experiments on weeds - exposing e.g. a 3 foot by 4 foot areas of soil and seeing what sprouts there, and what survives. There's a "wormstone", consisting of iron rods pushed down and implanted in the bedrock, their tops level with and just poking through a round "mill stone" (which has now dropped maybe 5cm). And there are the original greenhouses. They've tried to plant those, and the experimental and kitchen beds, with plants that might have been there, based on Charles' experimental records and Emma's garden purchases.

The property was used as a girls' school for twenty years in between the last Darwin residents and its reincarnation as a museum, so most of the furnishings, etc. have had to be recreated.

Downstairs has been recreated much as it was in Darwin's time, based on photographs and documentary sources, though the school apparently preserved his study as it had been on his death. There's also the living room, where the family seem to have done a lot of reading, and a dining room. The kitchen is now the tea room, and the new study built just before Darwin's death is the shop.

Upstairs are exhibits on Darwin's life and work. Some of this is aimed at children and there wasn't much that was new to me. My favourite display was a recreation of the Beagle cabin in which Darwin worked and slept - a facsimile of some of his Beagle notebooks was also intriguing.

What really came across from seeing Down House - reinforcing the biographies I have read - was the sheer domesticity of Darwin's life. His family life seems much more attractive - to me, but I suspect to most modern viewers - than any other Victorian household I know of. Darwin's social status and establishment position played a huge role in helping him spread his ideas - one can only imagine how natural selection would have fared if its leading advocate had been Wallace instead - but Darwin's personal appeal, as a loving father and husband, may also have been important. (It's notable that some Christians have tried to reclaim Darwin, for example with the invention of a deathbed conversion.)

Recommended reading (links are to my reviews):

On the way home we stopped for tea and cakes in Westerham. There we found a nice little secondhand bookshop Barely Read that was having a closing down sale - going Internet-only, like so many other bookshops - and I bought The Proper Study of Mankind (a collection of Isaiah Berlin's essays) and William Dalrymple's White Mughals. I also had a quick look at the church, which is by far the widest church I've seen - it's so wide it's almost square!