Last week we went on a tour of Didcot A. Commissioned around 1970, this is a coal-fired power station capable of generating around 2GW, with four 500MW units. The tour lasted more than two hours and we got to see at least something of most of the parts of the station. (We also got to see an introductory video which was aimed more at school students and dragged on a bit. This did mention global warming, but spent more time talking about nPower's renewable energy projects than the pressing need to stop burning coal...) 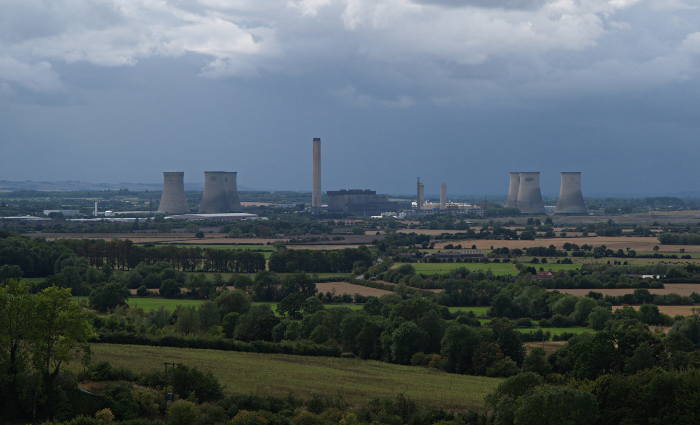 Didcot A and B from the Wittenham Clumps

The guts of the station consists of four coupled systems.

The first involves the combustion of coal, augmented with up to 5% biomass, to produce heat. The coal is shipped from Canada and Siberia to the Severn, and thence via rail. We got to see a train moving very slowly through the unloading station, where the bottom of the carriages opens and dumps 70 tons of coal in a few seconds into an underground hopper/conveyor system that takes it to the storage area, while a man walked alongside manually locking the carriage bottoms closed again once they'd emptied.

The stockpiles were not so large at the moment, but still impressive. The coal from there is first milled down to a fine power and then injected into the boiler (which is started on propane and then run on oil up to 250MW, before being switched to coal). The station can burn up to 18,000 tons of coal a day.

The second is a closed system containing highly purified water, which is heated to steam in the boiler and then used to drive the turbines, in several stages (high, medium and low pressure). We didn't really see any of this, as we couldn't look inside the boilers or the turbine housings. 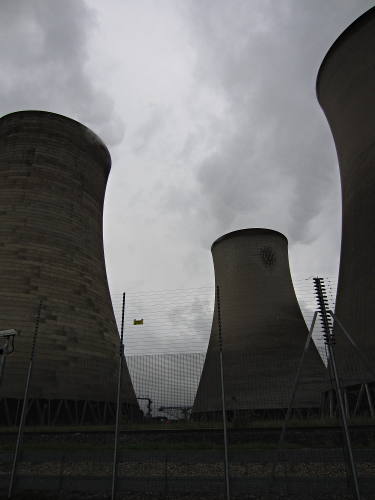 The third is a cooling system using river water (up to 70 cubic metres a second) which includes the most prominent feature of Didcot A, the six huge cooling towers. These are actually completely empty, and just cool hot water from around 32 degrees to below 27 (the warmest the station is allowed to return it to the river); the white clouds coming from their tops are water vapour.

There's a weird perspective illusion with the cooling towers. They're about 100 metres high and seem huge seen from a distance - as in the top photo - where they loom over the entire Thames Valley. From the car park right next to them they seemed much smaller. And then at the end of the tour, after drizzle for two hours, the sun came out and we had a grand sunset behind them, in which they again seemed impressively large. (We weren't allowed to take photos at all inside the plant, unfortunately; the photo above is from the car park outside the fence.) The chimney on the boiler is the tallest part of the station, at 200 metres, but doesn't seem as impressive.

The fourth system is the actual electrical generation, which we saw something of in the rather noisy generator room. Small exciter generators are used to drive the central electromagnets in the rotors, which are driven by the turbines in hydrogen-cooled generators. The resulting electricity is transformed up to 400kV before being shunted to the National Grid operated substation just next door. (I need to go back and reread Wildi, but my copy is unfortunately in storage in Sydney.)

We got to see the control room, which looks like something out of an sf film. There's also a set of four Royals-Royce jet engines which can be started from batteries and provide black-start capability both to Didcot A and to the power "island" centred on it. (They can also be called on for peaking power when the prices are high enough.) And we got decent views of Didcot B next door. This is a more modern 1.5GW combined-cycle gas plant, which lacks large cooling towers because they couldn't get planning permission for them and instead uses 5MW driving fans in much smaller cooling towers.

Didcot A is due to be shut down within three years due to EU pollution regulation. Here it's not the carbon dioxide that is the problem (though the possibility of a higher price for carbon permits in the future must have weighed on the economics), but the sulphur dioxide, which nPower would have to remove from the emissions using limestone slurry if they they wanted to continue operating. That would only have made economic sense if the plant could have been expanded, apparently, but the railway system isn't capable of bringing in the additional coal that would require.

With a number of other coal-fired power stations due to close for the same reason, the United Kingdom needs to build nearly 8GW of new power generation just to replace them.