Camilla made Pavlova to celebrate Australia Day, Madeleine visiting and Rosalind's birthday, and that went down a treat. And Helen slept peacefully through the whole event. 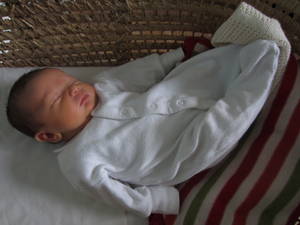 If Helen had waited till her due date she'd be a snake, but by coming early she made herself into a dragon. We're thinking of the Chinese name Mei Long, or 寐龍, from the name of the dinosaur Mei long, a duck-sized troodontid. This means something like "sleeping dragon". But my cousin Doug and Camilla's friend Janice tell us that the word for dragon long is quite masculine - it's in the names of Bruce Lee and Jackie Chan, for example, and that this would be rather unconventional.

Managed to get a not-too-terrible photo of Helen for her applications for Australian citizenship and a passport. Trying to get her front-on with her mouth shut but her eyes open was something of a challenge - and of course the very best photo was the one in which she coughed up a bit of milk - but the photographer had clearly had some experience with babies, even if his online portfolio is more transport oriented.

Camilla has got the hang of the sling now, and that's a lot easier than the pram. So Helen got her first trip to the Ashmolean, where we visited the Egyptian galleries and I tried to explain to her that "mummy" isn't a proper noun, without much success. Helen's food processing is improving: she's pooping once a day now, instead of every few hours, she can latch on very effectively, and she can drink 80ml of milk in one hit. (Scaled up, that's the equivalent of me drinking two litres.) And she's up to 3.25kg, so that's clearly having some effect.

Unfortunately the little monster has gone nocturnal on us: sleeps soundly during the day but won't settle at night. It doesn't help that it's so gloomy outside - cold, wet, no sign of the sun - but we need to help her get a normal circadian rhythm going. So low-intensity reddish lighting at night and bright white lighting during the day.