<- the priorities of autonomous cars - safety or convenience?
Connecting Oxford ->

I had to go into London to renew my Australian passport, so I took the opportunity to visit some attractions: the Bank of England Museum and the Guildhall Art Gallery. 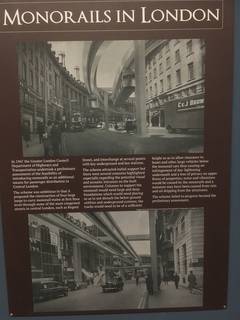 But first of all, some observations on transport. Cycling to Oxford station was lovely, because west-north through traffic had been blocked as a result of the St Giles Fair and a sinkhole on Walton St — Hythe Bridge St had pretty much no motor traffic on it, and was lovely to cycle along. At Didcot someone got on with a bike and sat down next to me, and since I was reading Carlton Reid's Bike Boom of course we got to talking about cycling and transport (and classical music, since they played the French horn), and I got to plug low traffic neighbourhoods and Oxfordshire Liveable Streets. Using the Underground was uneventful (I forgot my Oyster card, but was reminded that I could just use a contactless debit card instead) but I ended up doing a fair bit of walking, starting with the Strand from Embankment Station to the Australian High Commission and then the Bank of England Museum. The Bank junction does not seem particularly pedestrian-friendly now, so it must have been pretty horrible before it was made bus-only. Perhaps now the scheme is permanent, the space can be redesigned to be more friendly.

I had just got through security at the High Commission and checked-in when my name was called, and the actual passport renewal took barely five minutes — and almost £250! — so I had five hours before I needed to be at Paddington to get the last off-peak train back to Oxford.

First up was the Bank of England Museum, which had some nice bits and pieces on the history of the bank — the physical building and staff as well as the institution — as well as displays of coins and banknotes and gold bars and all the security features accompanying them (along with attempts to explain to the public what setting interest rates actually involves). I'd picked this as something Helen probably wouldn't enjoy, but actually there were quite a few child-friendly bits, and indeed there was a primary school class in there.

Then I made a quick visit to Daunt Books, had lunch in the cafe below St Mary-le-Bow, and caught the tail end of an organ recital in the church (the Bach Fantasia and Fugue in G minor BWV 542). Then to the Guildhall Art Gallery, where I paid to see the excellent temporary exhibition, of paintings of London, looked at the remains of the Roman amphitheatre, and caught part of a tour of the main galleries. It's a fabulous collection and it's free, so definitely worth a visit if you're in the area and like paintings. All up, a fun trip.