Helen's school has lost its maths awards and gained a "house" system. One of the reasons I preferred Larkrise to other schools was the absence of anything like that, so I can't say I'm very happy about this.

I wrote last year about the school reward schemes. Since then Helen received her Golden Award (it seems every child gets one at some point during the year) and stopped thinking about those. She occasionally mentions who got the award that week, but mostly it only comes up when we read the school newsletter together. She is a little annoyed that the special school awards for mathematics have disappeared, however, since that means she won't ever get one. (The classroom "dojo points" have also disappeared, but I think those were particular to last year's class teacher.) 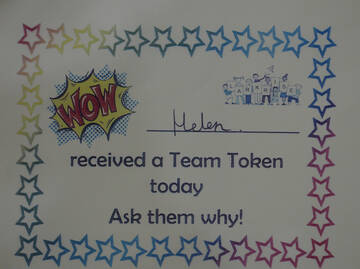 The school has acquired some kind of "house" system: Phoenix, Griffin, Dragon and Pegasus I think the names are; they are also colour-coded. The children get "team tokens" which are added up every week across the school and the winning team gets some perk (a Forest school outing or a hot chocolate).

The artificiality, or even unfairness, of this is already clear to Helen: in a week when she earns multiple tokens and her team gets the most in her class, other children in her class may be rewarded instead. Problems with collective responsibility aside, this division into artificial groupings doesn't seem much of a motivating force at all for Helen, or as far as I can tell for any of her friends, which makes the whole system kind of pointless. And if it were pushed to the extent it did motivate the children, I don't think that would be a good thing. Do we want children accustomed to supporting or opposing or categorising people based only on labels? It seems to me that the UK has enough problems already with people labelling others based on which football clubs they support or how they voted in a referendum three and a half years ago. And even something as abstract as Blue versus Green can escalate...

In a few contexts, such as quickly separating children into teams for games or sports, I can see how this kind of scheme might be useful, but there are surely simpler ways of doing that.

Update: we got a new head three months after I wrote this, and this house system just quietly disappeared.