Parcelforce tried to deliver something to me at work and left a card. Rather than paying for redelivery I decided to get some exercise cycling up to their depot in Langford Locks, on the NW outskirts of Kidlington. Rather than braving the Banbury/Oxford Rd and the A4260, which looked a bit hairy on Google Streetview, I cycled up the canal instead. 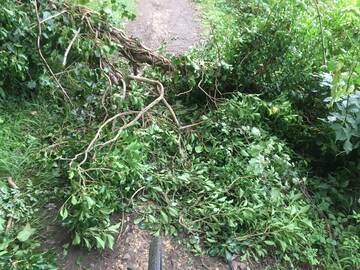 This has been beautifully surfaced almost as far as the ring road - so recently the loose grit hasn't yet shifted - but then becomes a bumpy dirt/gravel track, which I took most of in 2nd or 3rd gear and where I was glad my bike has suspension forks and a suspension seat post! There had been a storm the previous night, too, so bushes were lying across the path and there was even one small tree I had to lift the bike over.

It's not shown on Google Maps, but as shown on Open Streetmap there is a (just) negotiable path from the towpath up on onto Langford Locks, though anything wider than an ordinary bike wouldn't fit and one has to lift it over the guardrail at the top to get onto the road. After collecting my parcel from Parcelforce, I came back to Oxford via Langford Lane and Woodstock Rd. All up a 28km round trip.

What was the mysterious parcel, too big to fit through the massive delivery slot on the Modern Languages front door? Pretty much the smallest book I've acquired this year, part of my Archipelago Books subscription, Tomás González' Difficult Light.

Putting my transport planning hat on, I have to say this route, while ok for recreation, is completely unsuitable for significant volumes of cycle traffic. We absolutely need proper cycling routes from Oxford to Kidlington and Yarnton/Woodstock, including grade-separated crossings of the A40.