I went to take a look at the changes to Abingdon Rd, and cycled and walked the stretch from the Weirs Lane (Donnington Bridge) junction to St Aldates, in both directions. I'm not sure cycling here is any worse than before — it was always pretty bad — but I can't see how it's the least bit better in any way. So to be honest it seems a waste of £20,000, or whatever the changes cost. 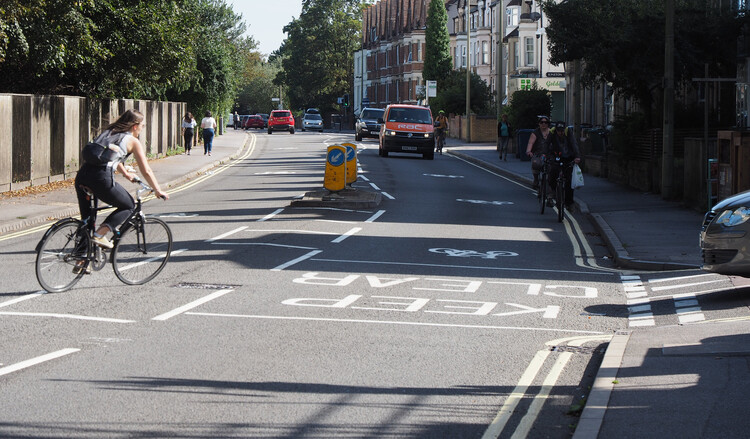 I saw not one person cycling in primary, despite all the bicycle symbols

Now the cycle symbols in the middle of the carriageway, and the removal of the lanes, suggest an attempt to encourage so-called "vehicular cycling", where people cycle in the traffic flow instead of alongside it. But I saw no one - not a single person - cycling in "primary" position in the middle of the carriageway and, given this is a 30mph road carrying dense traffic, that seems an unlikely proposition even for the fittest and most confident. (It is notable that even on Cowley Rd, with a 20mph speed limit and the often physically constrained carriageway mostly keeping speeds low, almost everyone keeps left cycling, even when that places them in the "door zone".) This kind of approach to cycling is, in any event, absolutely incompatible with any attempt to make cycling an option for everyone.

I did this from 4pm to 4.40pm on a Thursday afternoon. This was in in August, with schools and unis out, but it still felt like a very busy road, as indeed it is: the oxbike stats show just over 10,000 cars, 600 cycles and 700 buses in a 24 hour period spanning my visit (at a count point just north of Weirs Lane). And the 2018 DfT counts reported average annual daily traffic at nearly 16,000.

There is no protection or assistance when cycle lanes end. some of the stretches of cycle lane are only 20 metres long, and some of these bizarrely coincide with single yellow lines, so look like marked parking bays (and are used as such). And on top of that I saw at least two vehicles parked on double yellows.

Some drivers were waiting behind cycles, and overtaking only when there was space to do so safely, but others just squeezed by regardless of oncoming traffic or pinch points. I'm not convinced passing distances will be either better or worse with the new layout. 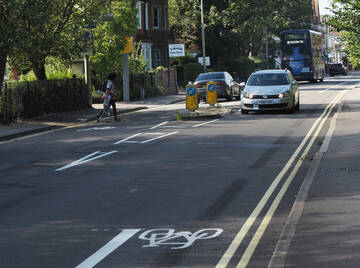 The footpaths along Abingdon Rd are ok, but it's certainly not feasible to take space from them (maybe in a few small areas). At Hinksey Park I noticed one mother and child having to wait at least a minute for a chance to scuttle across the road (to get to the southbound bus stop). And there are no protected crossing options in the 1.3 kilometres between the southern end of Folly Bridge and Oswestry Rd. There really should be a pedestrian crossing at Hinksey Park. It's true that there's not much on the east side, but as well as bus users this would help with access to and from the lane (north of the Spires hotel) that connects to the Thames path.