As part of the emergency active travel funding, the cycle tracks on Magdalen Bridge have been widened. On Wednesday evening (August 5) I went and had a look at the changes for myself. There I ran into Chris (Pedal&Post) and we watched the interactions between motor traffic and people cycling for maybe half an hour, from 5.30 to 6pm.

What are the changes? The cycle lanes on the bridge — and a short distance on either side — have been widened, maybe from 1.5m to 2.4m (based on the plans below, I didn't actually measure them). And the centre line has been removed. There are also large cycle symbols in each of the cycle lanes. 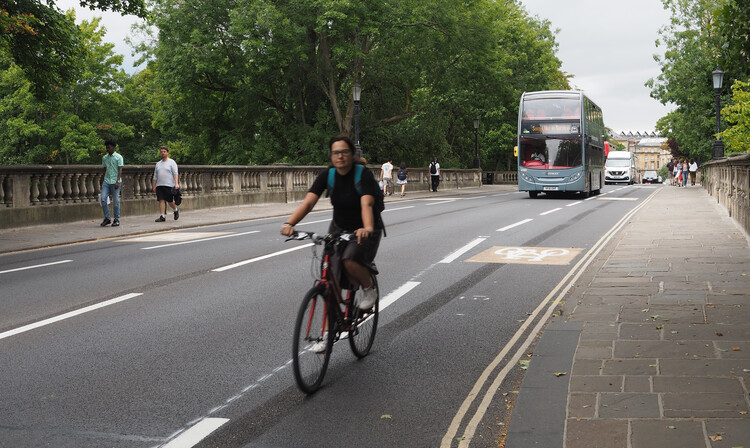 You can see the old cycle path markings, and the removed centre line in front of the bus

Here's the plan (thanks Graham Smith): 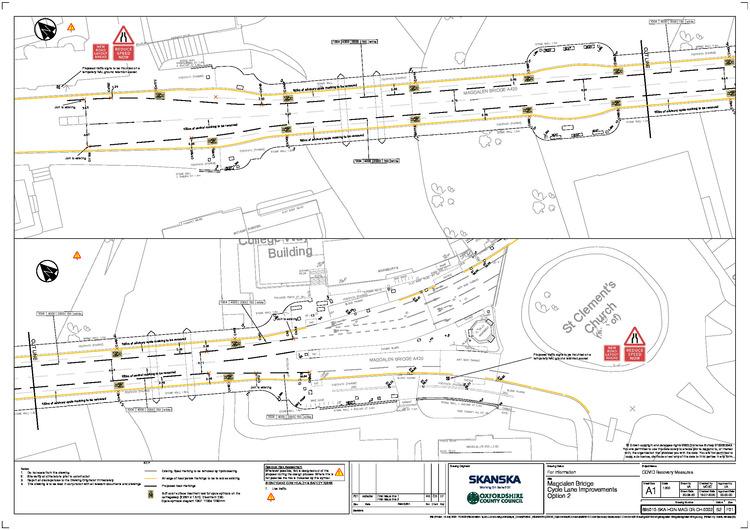 How does it work? Traffic speeds seemed to be lower than before, but that's hard to judge (and may be a temporary effect due to the unfamiliarity of the layout). And it looks more inviting for people cycling — I could just about imagine cycling here with my seven year-old now, getting her to keep left and holding the outside of the lane behind her.

The new configuration may be marginally better for people walking, as there seemed to be fewer people cycling right on the kerbline. 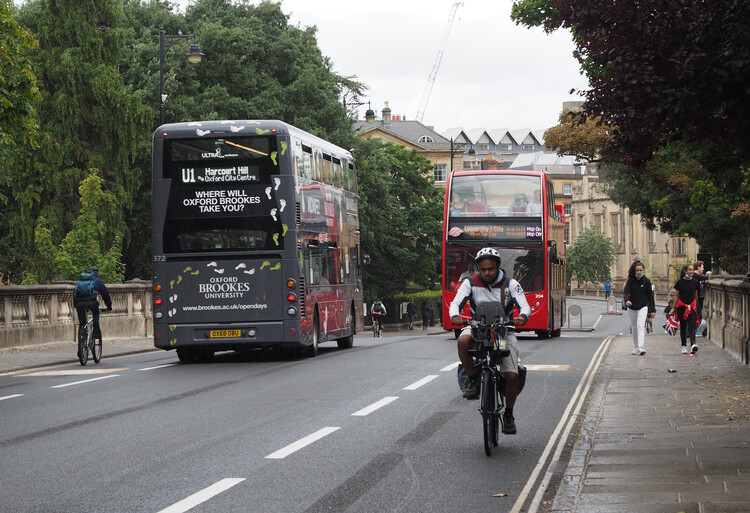 both buses are on the line of the old cycle track

The major concern is that, with the central carriageway just 4.6m wide at narrowest (from the plan), two buses are unable to pass one another without entering the cycle lanes. For two cars this is possible, if only just for large SUVs, though drivers may be tempted to swerve into the cycle track to increase their separation from oncoming vehicles, rather than slowing down. But two buses can not physically pass one another without entering the cycle lanes, which poses a real problem if they meet each other when those lanes are full (with cycles overtaking one another, or simply with peak-hour two bicycle wide densities).

The standard Cycle Infrastructure Design LTN 1/20 gives 5.5m as a minimum width for a 2-way traffic lane, with no centre line, between advisory cycle lanes (4m is only allowable with <4000 mv/day and "minimal bus/HGV traffic"). And it says of centre line removal: "On narrower roads, where oncoming motor vehicles pass each other, one or both vehicles may need to momentarily pull into their respective near-side advisory cycle lanes, with drivers having first checked to see the lanes are clear of cyclists. This arrangement is only suitable on quieter roads, with a maximum two-way motor vehicle flow of around 4,500 motor vehicles a day, or 500 per hour at peak times. With higher volumes of traffic there is a higher risk of conflict with cyclists, and the benefits of the cycle lanes are lost."

This could be viewed as something like a Dutch "cycle street", but that's a layout designed for much lower volumes of traffic. The CROW manual says that 200pcu/hr is the maximum recommended for a bicycle street, but even if all non-bus traffic were removed, Magdalen Bridge carries 200 buses (400pcu) an hour in peak. It might also fail the other CROW recommendation, that "there should at least be double the number of people cycling than there are motor vehicles".

Something like this approach has also been implemented on Windmill Rd, and something similar is planned for Abingdon Rd. The key there is likely to be continuous provision.

Update: A possible improvement to what has been done would be to paint the outer 40 or 50cm of the cycle lanes a different colour, marking them as a kind of "median" space that could be used by either cycles or buses, but only temporarily (and obviously not at the same time).

Since the changes have just gone in, people are mostly encountering the new layout for the first time and their behaviour may change once they are accustomed to the layout. Most likely they will become less cautious and drive faster.

Traffic is still not back to pre-lockdown levels and it is August, without most undergraduates but with nothing like normal tourist numbers. So both cycle and car and pedestrian numbers are significantly lower than potential peaks. The Oxbike counts for the 24 hours to 8.30pm that day were 7,600 cars; 4,500 cycles; 4,100 pedestrians; and 2,500 buses - but the last (2018) historical DfT traffic counts/estimates were 12,000 cars/vans, 12,000 cycles, and 2,100 buses.

I saw one "snapshot" with relatively dense traffic. The dynamics will be very different at low traffic levels. If there's no traffic going the other way, many drivers are likely to do 30mph here (as they currently do) and some may drive faster with the missing central line removing the "constraint" of a narrow traffic lane. When faced with oncoming traffic, some of these drivers are likely to use the cycle lane rather than slow down. But the wider cycle lanes may increase the passing distances to people cycling.

There's a risk of "observer interference". I'm pretty sure at least one bus driver started veering into the cycle lane and changed their mind when they saw Chris obviously videoing them on his smartphone and me pointing a moderately large camera at them.

There have been no changes on either side of the bridge, either to the Plain roundabout or to the horrible bit of High St between Magdalen College and the Botanic Gardens. The westbound cycle lane there just disappears, and people cycling to Longwall have to cross a lane of motor traffic and then filter between traffic lanes, while the eastbound lane is dangerously narrow (worse than Magdalen Bridge itself was before the current changes).

people cycling are forced to merge abruptly here, and maybe get into the right-hand turn lane 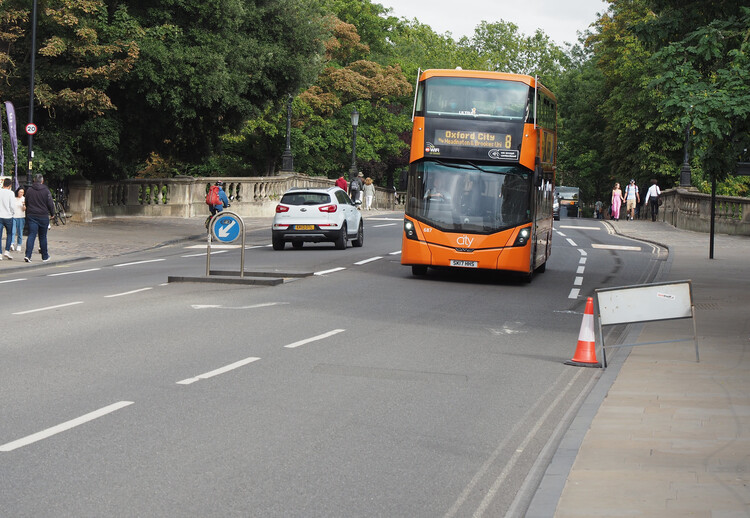 going through this pinch point alongside a bus is just unsafe 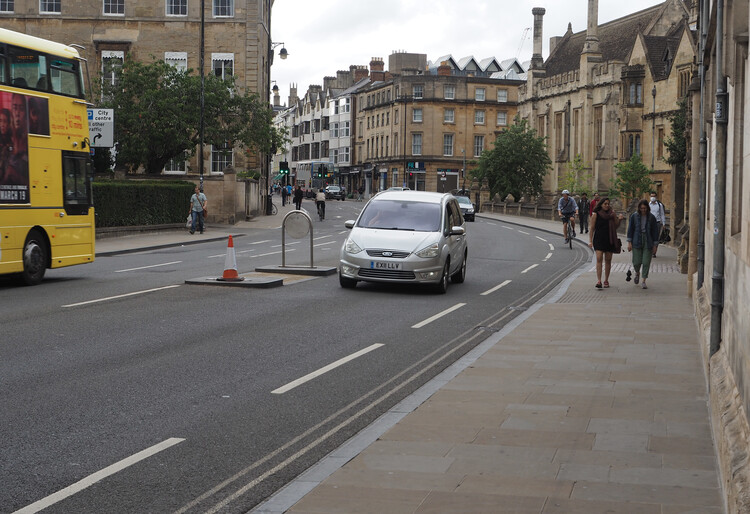 So, however it works out, this change isn't by itself going to do much to enable more people to cycle. We really need that bus gate on St Cross or South Parks, to reduce motor traffic enough that the right-hand turn lane at Longwall can be removed, freeing up space there for adequate cycle lanes, and so the Magdalen Bridge entry to the Plain can be narrowed to a single lane, allowing reconfiguration of the roundabout along Dutch lines (as has been done in locations in Cambridge and Manchester).

Connecting Oxford's centre with the "larger half" of its east, Magdalen Bridge is the central bottleneck in the city's transport system. Botley Rd may get more congested, but Magdalen Bridge is moving considerably more people — it is the busiest bus route in the city as well as the busiest cycle route. (It is already one of the busiest cycle routes in the UK, but if Oxford ever achieves mass cycling it might rival Utrecht's Vredenburg, which at peak moves 4000 cycles per hour. If only we had the space to provide the bus-cycle separation they have there!)