So "Quickways" is a misnomer — "Saferways" would be much better. My previous post about these schemes focused on technical details. Here I want to focus on the basic road safety argument for them. 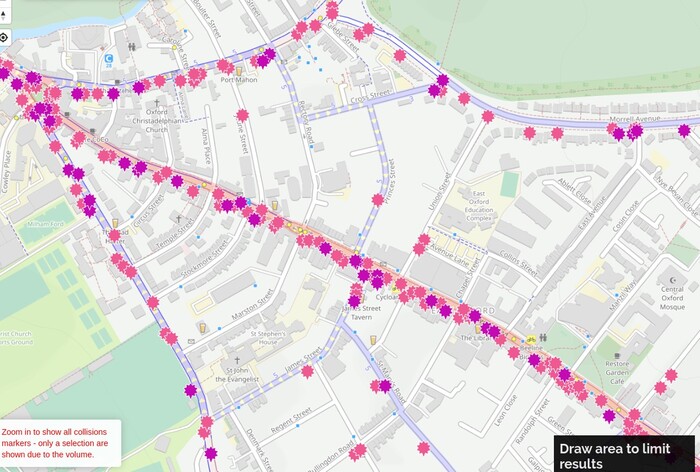 This map shows cycling collisions on some of the routes (purple is serious). The solution to this, as shown by Swedish Vision Zero and Dutch Sustainable Safety approaches, is to avoid mixing cycling with significant volumes of motor traffic, and the Quickways are a step towards that.

The Quickways schemes don't address the huge problems on the inner stretch of Cowley Rd, where they just have "20mph roundels refreshed", and they do little to improve the junctions, but in other places they will really improve safety.

The left photo shows the cycle lane on Iffley Rd, just south of James St, which runs straight into a line of parked cars. This would be farcical if it wasn't so dangerous. People cycling are forced to merge with motor traffic here, at speed, with poor forward visibility. Then people have to cycle with dooring risk on one side and motor traffic passing too close on the other side. I cycle faster than is comfortable here, to minimise the time spent in such a hostile situation and because going faster means fewer drivers will insist on overtaking. Cycling here with a child doing 6mph is mostly just too horrible.

Those same parked cars also obscure the view of traffic for anyone trying to turn out of James St, as shown in the right-hand photo above. (Poor visibility is often overlooked as a concern, but it's a major contributor to collisions.)

On Morrell Avenue, a similar situation is exacerbated by the climb up the hill. Having to stop and restart makes that even more of a deterrent, and drivers are less likely to wait behind someone cycling at 5mph than at 10mph, so close passes are pretty much inevitable here. There's only room for a cycle lane in one direction here, even with the parking removed, but having an uphill cycle lane will be a huge improvement.

Warneford Lane is possibly the worst of the routes at the moment: the marked cycle lanes there are positively dangerous. Even well-parked cars can stick 20cm into the lane, and people cycling are supposed to stay a metre away from parked cars because of dooring risks. Which just doesn't add up! There is 6m of space in each direction on Warneford Lane, which will just fit 3m for motor traffic, a 0.5m buffer, and 2.5m for a cycle lane or for parking. There is no configuration here which will fit all three. The existing layout just shoves people cycling into the buffer between moving and parked cars. (The alternative solution for Morrell Avenue and Warneford Lane would be to put a bus gate onto Warneford Lane.

Now, onto removing all those 650 parking places... Yes, removing parking may cause some problems, but those in no way override the need to provide basic safety and accessibility for people cycling. The two areas that are likely to be most problematic for parking are Donnington, because it lacks a CPZ (it is now the closest area to Carfax without one), and the "EO" CPZ zone, which is probably under the most parking pressure. (Most of the parking on Warneford Lane is, anecdotally, used by Brookes students living in halls of residence, who are not supposed to have cars.)

The potential problem in Donnington should have been addressed by including it in the last round of CPZs - it had higher resident support than Florence Park or Temple Cowley, so I don't know why it was left out. Merging the EO and MN CPZs might help. But in the longer term the EO parking area may need a system like Amsterdam's, with permit numbers capped at a certain fraction of the available spaces and a waiting list for new permits. (Such a system could be deployed across Oxford and used to steadily reduce parking, as Amsterdam has been doing.)

To support disabled parking and loading and deliveries, and reduce the need for parking on the cycle lanes, the first parking places in each side street along main roads could be made into disabled and loading bays.