Mark a cycle lane across the Cowley Place entry and exit, connecting the Iffley Rd cycle lane with the one on Magdalen Bridge. This would help to remind drivers turning into Cowley Place to look out for people cycling and might slow them down. (This is the second largest cluster of collisions.)

Not only does the car parking generate additional car movements onto and off the roundabout, but those movements are different to the other movements that are happening, and so unexpected and dangerous. More generally, the parking around the roundabout creates "visual clutter", making it harder to see what's happening on the roundabout — for example, for cars entering from Cowley Rd to see cycles heading for Iffley Rd.

In 2015-2021 there were two serious accidents outside Sainsburys involving car doors opening.

The parking on the east side of the roundabout is also a problem. Examples I've seen myself include a parked car pulling out and forcing a driver coming out of St Clements to brake suddenly and a car coming off Magdalen Bridge and pulling in to park, almost taking out a cyclist on its left who no doubt assumed the car was heading for Cowley Rd and that they could safely continue on its left. And the parking here, especially of larger vans, blocks visibility, for pedestrians crossing the Cowley exit and for cyclists entering from Cowley Rd — these photographs show a car emerging from complete occlusion behind the parked cars. 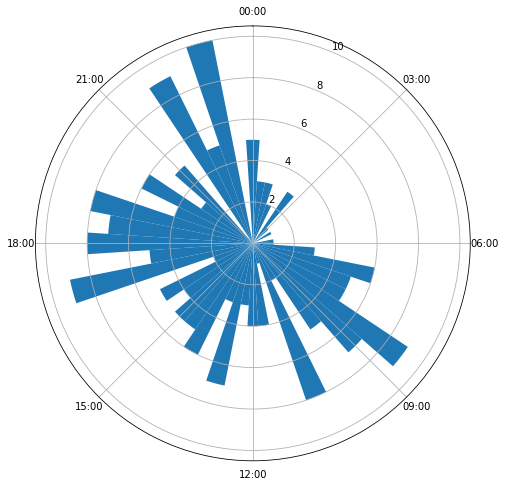 collisions at the Plain by time of day (source)

A disproportionate number of collisions at the Plain have happened in the evening and at night, so reducing motor traffic at those times would be particularly useful. (This would also make cycling at night on High St itself much less dangerous.)

Other than across the Cowley Place entry, I am skeptical about marking a cycle lane all the way around the outside of the roundabout, because that would encourage people cycling to keep left when moving right is safer, and might induce aggression from drivers towards people "taking primary". There are too many possible cycle movements on the southern half of the roundabout to make it practical to mark those with cycle lanes (as on the approach from Magdalen Bridge). And in general too many painted directions on the roadway risk becoming distracting rather than useful.

Using wands or surface bumps to constrain motor traffic movements might work, but these are a collision hazard in themselves, so this would have to be done carefully. The most obvious use is to separate cycles and motor vehicles on entry, forcing the latter to slow to turn. Possible locations are marked in blue in the image below. 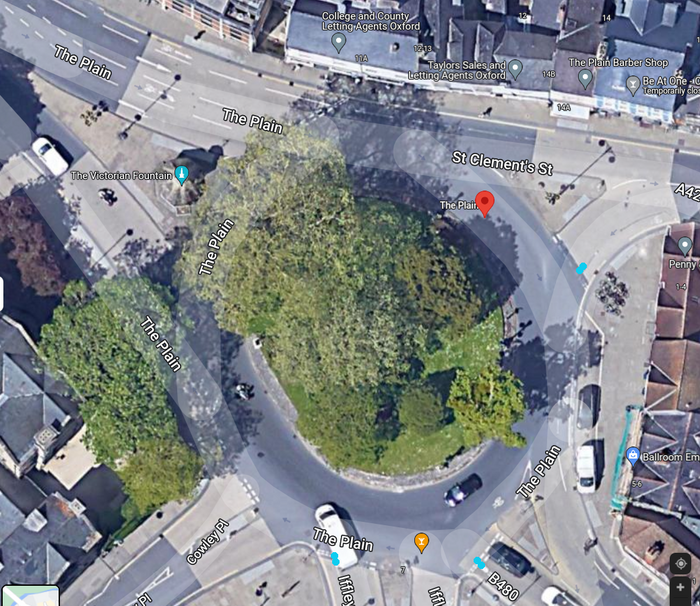 Raised tables on the entries would also help to slow entering motor traffic — the most important is clearly the Cowley Rd entry. (Ideally the pedestrian "crossings" would be level.)

Note: the county's Active Travel team has a design for rebuilding the Cowley entry - making it much squarer - and that seems sensible, but would require more engineering than anything I'm considering here.

There are two obvious schemes once the county gets additional powers to use ANPR cameras to restrict traffic.

Use an ANPR camera to enforce the ban on direct turns from Cowley Rd to Iffley Rd. This is quite a frequent manoeuvre, and creates risks for pedestrians crossing the Iffley exit as well as for people cycling.

Put a School Streets scheme on Cowley Place. This would reduce the traffic using that arm of the roundabout, which as mentioned is the second largest cluster of collisions. Enough of the parking in Cowley Place should be removed to allow buses to turn, which might enable Magdalen College School buses to load and unload there instead of having to pull up on the Plain itself. 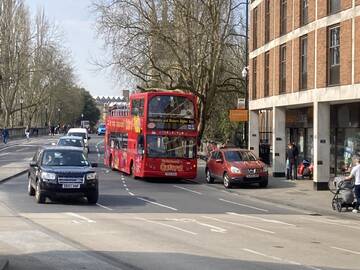 On the subject of buses, why is there a bus stop right on the entry from Magdalen Bridge? (The one in the photo stood there for several minutes loading and unloading passengers.) I understand that the Open Top bus wants to turn around at the Plain and also wants to have a stop on this side of Magdalen Bridge, but this is a farcically bad location for a bus stop. I would suggest either of the parking blocks - outside Sainsbury's or outside the Emporium - be repurposed as a bus stop or, if parking is removed from Cowley Place so MCS buses can turn there, that also be used by the Open Top bus.

All of these schemes might collectively just reduce the collision rate by 10%. In the long term a complete redesign of the Plain will be needed to make 8-80 cycling safe and accessible, but that will take years and should wait on the planned traffic filters on St Cross and St Clements.