At least during the daytime, outside loading hours, there are no cars at all, moving or parked in the core area of York. This means that one never has to think about traffic at all, or even about getting around parked cars, which makes for a completely different feel to bits of Oxford such as Catte St or Turl St or New Inn Hall St or Merton St or Pembroke St, where anyone walking is likely to encounter at least one moving motor vehicle and many parked ones. (Oxford streets such as Pembroke St and New Inn Hall St may be more nicely surfaced than most of the York streets, but that just demonstrates that removing motor vehicles is much more important than attractive designs in changing the way people experience and use streets.)

Oxford visitor satisfaction in the 2018 Visit Britain destination report was 39%, versus York's 57%. And that was before the footstreets scheme!

There are concerns about the pedestrianisation for people cycling and blue badge users.

It's hard to see how blue badge parking inside the footstreets area could work: these are narrow streets with high volume pedestrian flows and even low numbers of motor vehicle movements would be detrimental to them, even if space could be found to store cars. There is blue badge parking on the periphery of the centre, in Duncombe Place and in the Coppergate Centre (which provides a Shopmobility service) and those could be expanded. Some provision towards the north-east might be possible too, though that may conflict with resident parking.

Cycling is similarly difficult to fit in, but there needs to be at least one NW-SE cycle route through the city centre, possibly on Parliament St (where there's plenty of width) and Blake St. (I thought of that route myself, before finding that York Cycling Campaign had proposed just this.) Bridge-Pavement-Stonebow is clearly intended as the E-W cycle route; there's even a very short wand-protected stretch of cycle track.

Cycling numbers in York seem well under 10% of Oxford's, possibly under 5%. There's some infrastructure - cycle lanes, ASLs, etc. - which is actually no worse than Oxford's, and there's a bike hire scheme as well as an e-scooter hire scheme. The inner ring road has a lot of traffic and actually getting in to the city centre looks difficult, but things may be better further out, where there's apparently a kind of orbital cycling route, and perhaps around the university.

I don't see any reason not to extend the footstreet restrictions to cover the whole day, with a few hours in the morning and evening for loading access. That would allow removal of all the kerbs and double-yellow lines, and layouts that are more attractive and more accessible, especially to wheelchair and mobility scooter users.

Ouse Bridge should be for pedestrians and cycles and buses and taxis and access traffic, with no through routes for private motor vehicles inside the walls. That would allow the area around Micklegate to be de-motorised and help connect the west bank with the rest of the city.

The more residential areas inside the walls are already low traffic neighbourhoods with 20mph speed limits. The whole area inside the walls should be 20mph, and the carriageways there narrowed as much as possible. Walmgate, for example, should be 20mph and its one-way stretch could be narrowed to 3 metres, allowing for wider pavements. The inner ring road running around the walls should be made 20mph too, as it needs to be crossed to reach many destinations and is hard to avoid when walking or cycling. (Even better would be some kind of city-wide circulation scheme that took private motor traffic off the inner ring road entirely — that would open up a huge range of cycling routes but also enable a significantly better bus system.) 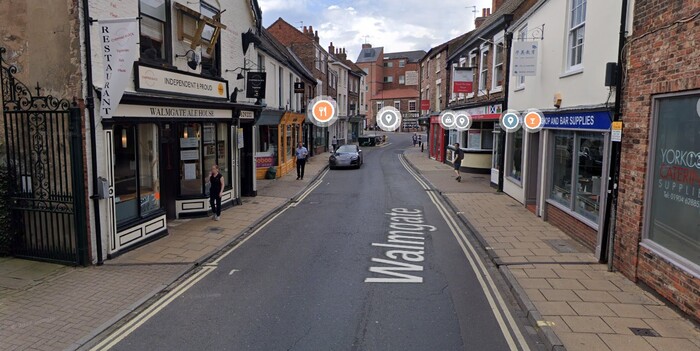