But while the goals may be the same, the unique geography of each filter — and the very different roads they are on — means that they may need quite different implementations. This can be illustrated by Hythe Bridge St and Marston Ferry Rd.

The Hythe Bridge St traffic filter needs to operate 24 hours, with exemptions only for emergency vehicles. This is necessary to enable it as a safe and accessible walking and cycling route. 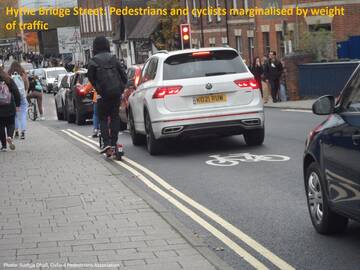 There are no buses on Hythe Bridge St, but the filter there will decongest buses using Frideswide Square and St Giles. The other major concerns are that Hythe Bridge St currently has pavements that are way too narrow for its high volumes of pedestrian traffic, and that it forces people cycling to mix with motor traffic. It is the key route connecting west Oxford to the city centre (and the railway station to the bus station).

The bridge itself is 9.5m wide. There is no way to support two-way motor traffic and provide adequate pavements, let alone space for cycling. Removal of motor traffic will allow 2.75m footways on either side and a 4m wide bi-directional cycle track in the middle, the latter usable by emergency vehicles. Taxis can use Park End St, which will continue to provide access to the Worcester St car park and to New Inn Hall St and other streets.

Ideally both taxis and local buses would be shifted from George St to Beaumont St, with the Worcester-HBS/George junction modified to support that. And at some point the bus station should be relocated to a more suitable location. We could then have a continuous, nearly car-free foot-cycle route running from the railway station across Frideswide Square, Hythe Bridge St, George St, Broad St and Longwall St, connecting to Botley Rd at one end and Magdalen Bridge and the east of the city at the other.

East-West cycle traffic on Hythe Bridge-George would then cross bus and taxi (and some cycle) traffic on Worcester St at a simple cross junction.

With fewer constraints, the Marston Ferry Rd filter can operate just in peak hour periods and have exemptions even then.

With fully separated cycle tracks and footpaths for most of its length, Marston Ferry Rd raises road safety concerns only at the western end, at the junction with Banbury Rd and access to the leisure centre and school, and where the track along the east bank of the Cherwell crosses (this will be more heavily used following housing developments at Mill Lane).

The key goals here are:

These goals can be achieved by peak hour restrictions that stop commuter traffic, with exemptions for taxis, blue badge holders, etc.