Even just on a ten day visit, one of the most striking things about Amsterdam is that there are too many cars in its inner city. The one-way "cars are guests" streets, with regular speed humps, work well to slow motor traffic, but in many places the network structure only inhibits through traffic on these rather than stopping it. And at a larger scale there are still major through routes within the S100 ring-road.

We caught a taxi from the eastern docks area to the museum quarter and the driver used a parallel "cars are guests" street (Sarphatistraat) to avoid a junction on the S100 inner ring-road.

I did a traffic count at the eastern junction of Huidenstraat and Herengracht, and 21 cars in ten minutes (at 2pm on a Sunday) seems like too many. Even assuming peak flows are twice as high, 240 cars an hour is within CROW guidelines for mixing cycling with motor vehicles, but this area has high "place value" as well as high densities of people walking and cycling, making the negative effects of car movements larger. Given the limited space here, every car movement along a block disturbs dozens of people (walking as well as cycling). 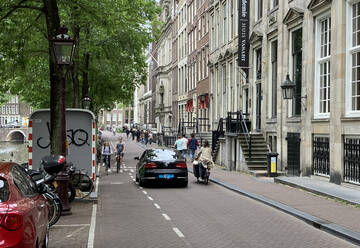 This photo shows a poorly timed overtake by a taxi, close-passing one person cycling just in time to squeeze two approaching in the contra-flow cycle lane.

Amsterdam has made headlines for reducing inner-city residential parking and is even proposing to remove all car parking on Herengracht, but it is not clear to me that that would help here: none of the vehicles I counted stopped or started in the adjoining streets. Nor did any of them look like service or delivery vehicles. 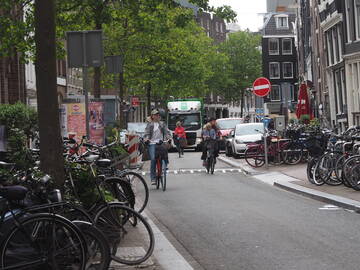 In other places things seemed better. On Spuistraat, which is one-way without contra-flow cycling, almost all the motor traffic (at least at 9.30 on a Monday morning) seemed to be services or deliveries. And the narrower street (or perhaps the sheer number of people cycling) stopped overtaking of cycles. (Our tour guide told us there used to be a separate northbound cycle track here, but it had recently been removed. That seems to have led to illegal contra-flow cycling.) 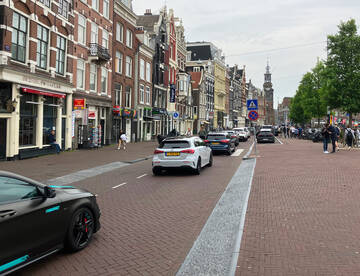 I regularly saw short stretches of congestion on streets in the centre. (The day we arrived there was a demonstration in Dam Square, and the tailbacks were much longer.) This photo (of Amstel approaching Muntplein) hardly shows gridlock, but given the high densities of people walking and cycling, even ten-car queues create significant negative externalities. Why are so many motor vehicles going through the very centre of the city? [Apparently it's to access the parking lots in the middle of the city. Why are there parking lots in Amsterdam's inner city?]

A digression to Den Haag. Outside the Escher Museum there's a pair of one-way streets which were clearly designed for mixed cycle-car use. But these were carrying high volumes of motor traffic (at least at 5pm) and cars were quite unpleasantly overtaking people cycling - who were keeping right and seemed no more willing to "hold primary" against motor traffic than UK cyclists are. I wouldn't have felt comfortable cycling here myself, let alone with Helen.

Amsterdam has something approaching a small motorway junction right inside the inner city, around the IJ-tunnel entry. 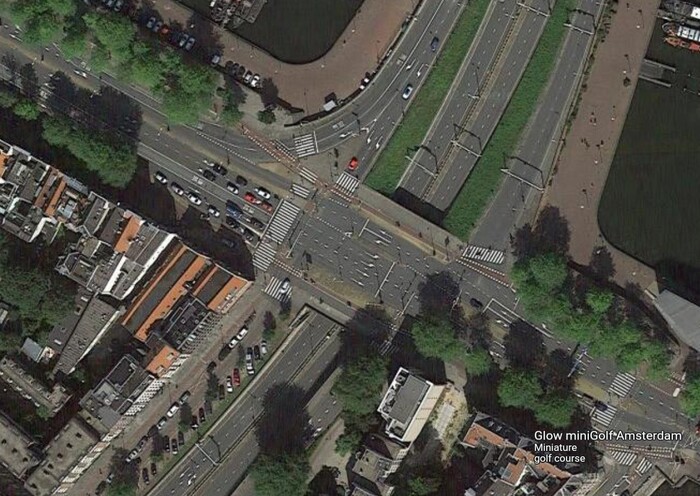 This is awkward and unpleasant to negotiate on foot or cycling (even if vastly safer and more accessible than something like the Wolvercote roundabout in Oxford). And the traffic this generates creates problems elsewhere. One obvious example is on Odebrug, where a two-way cycle track crosses over the road, with a pedestrian crossing across both the road and the cycle track, and the entry to the 1369 car parking places in Parking Centrum Oosterdok.

A radical solution to this would be to shut the IJ Tunnel, or rather to repurpose one of the tunnels for cycling (as has been done before when bad weather or strikes stop the ferries over the Ij running) and the other for buses and emergency vehicles. A quick play with Google Maps suggests almost all of the trips where using the IJ tunnel is faster than using the A10 are between Centrum and Noord, which are well connected by public transport (and would be better connected with a dedicated bus tunnel). To stop it being possible to drive across the city centre, Prins Hendrikkade, Weesperstraat and Kattenburgerstraat could then be disconnected from one another. And the parking garages that are generating terminating car movements could be gradually shrunk.

On a larger scale still, the Netherlands builds motorways just like any other country, possibly even better than most, and the Dutch own cars and drive just as much as the British. 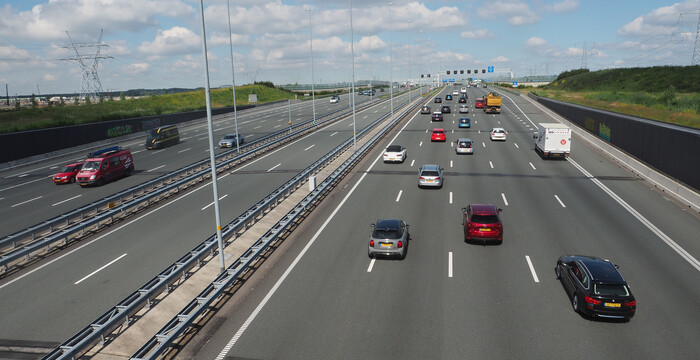 After visiting Amsterdam I read Verkade and te Brömmelstroet's Movement, which describes the failure of the Netherlands to curtail car-centric planning.