With 51 people scheduled to speak for two minutes each, followed by the cabinet members themselves speaking (and debating amendments), it was a long and lively cabinet meeting to decide on adoption of the Central Oxfordshire Travel Plan and the traffic filters in that. Roughly half the public speakers were against the traffic filters, a quarter were for them, and the other quarter wanted tweaks: Kennington or Noke to be given more permits, this filter or that to be dropped from the scheme.

There were some reasoned comments by opponents and some have realised that the status quo is unsustainable, even if they don't have real alternatives: Zaheer Iqbal really wanted to act on the climate emergency, but thought encouraging people to change habits would be enough; Emily Scaysbrook so reluctantly suggested a congestion charge that it came across as a way of putting action off (the Civic Society also called for consideration of a congestion charge, but they've been doing that for years, and I think that fight was lost in 2019); Mary Clarkson thought enforcing existing regulations would be enough; and Linda Smith suggested segregated cycle lanes without any suggestion as to where the space for those would be found, or how that would help buses. Other speakers were just incoherent: Richard Parnham complained that the traffic filters don't stop the buses responsible for most of the pollution, but at the same time criticised the county for trying to get funding for electric buses, as if that were some kind of devious thing to do.

Some of the speakers were outright abusive. The poor officer in the room the speakers were in copped a tirade just because there wasn't room for us in the public gallery. Some of the speakers (including Councillor Liam Walker) refused to stop talking when their time was up. And there was heckling from the public gallery. At one point the Oxford Clarion tweeted "It's all gone a bit Oxford Mail comments section". And the speeches exhibited pretty much the full range of loopiness. There were references (by different speakers) to "corruption", "akin to the Berlin Wall", "worse than Putin's Russia", "the Cutteslowe Walls", "an open prison" with no right to speak to the councillors face-to-face (while the speaker was doing just that), and "a violation of the UN Declaration of Human Rights", with the whole lot rounded off by Piers Corbyn giving a full on "climate change is a hoax" rant. Here's the protest in Bonn Square afterwards. 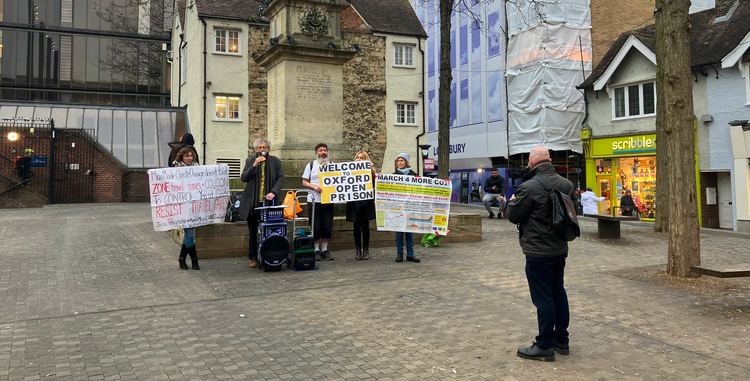 The cabinet speeches were interesting. Pete Sudbury took down the climate change deniers. Mark Lygo was the only cabinet member to vote against the traffic filters (but he voted for adopting the Central Oxfordshire Travel Plan which contains them, which seems slightly confused). Andrew Gant took off his glasses and mildly made some quite pointed responses to individual speakers. Tim Bearder wanted to know what's happening with the ZEZ and WPL (as do many of us). Dan Levy talked about the plans for the A40 being deferred (another big decision being made today, which I would have spoken on myself if getting one speaking slot hadn't been hard enough). Liz Brighouse was put off by the abusive anti speakers: "having not been sure when I got into this Council meeting actually how I was going to vote – but having sat here today, and listened to some of the abuse around this issue – I will be supporting the traffic filters". She also used her own experience to explain the basic problem: Hollow Way is no wider than it was fifty years ago, but car numbers have massively increased in that time.

The full meeting is available on video, and Oxford Clarion tweet-summarised the whole meeting.

My own speech was basically a cut-down version of this blog post.

The junction of Longwall St and High St has, on average, five reported collisions a year, one resulting in a serious injury. If left as it is, there is about a 40% chance of it killing someone in the next ten years. All it will take is a foot slipping on a pedal and a rider going under a bus.

Not only is this junction so hostile that hardly anyone will cycle there with younger children or let teenagers cycle there, but half of cycling adults won’t use it. And narrow pavements and high peak pedestrian flows make it unpleasant for people walking. Along with the Plain, this junction is a massive barrier to active travel between East Oxford and the city centre – a barrier that worst affects the young, old and disabled.

It is possible to redesign this junction to significantly improve safety and accessibility, but given the space constraints that requires the removal of the separate right-turn lane. And that is only possible if there is almost no motor traffic on Longwall St.

If you are serious about your commitments to Vision Zero, to increasing active travel rates, and to inclusive mobility, you need to do something here. I urge you not just to proceed with the traffic filters, but to replace the St Cross filter with a bus gate, operating twenty-four hours a day and with exemptions only for emergency vehicles and local buses.

There are many dangerous junctions in Oxford, and road danger is just one of many challenges. Bus congestion and air pollution and the climate emergency also call for drastic reductions in private motor traffic. You know the traffic filters and the other elements of the Travel Plan are necessary, please have the courage to implement them.