Europython 2010 was conveniently in Birmingham — an hour forty by bus — and Camilla was going with two of her colleagues, so I tagged along. As a sysadmin I've never done any large-scale programming, but Python has been my programming language of choice for fifteen years.

The talks were a mixed bunch, and picking which talk to go to from the four on in each timeslot wasn't always easy, but there was some good stuff going.

Raymond Hettinger gave two talks on "Idiomatic Python", basically describing some not so well-known features of the language and introducing his Collections module. He also gave a talk on Monocle, which is an asynchronous framework using generators, built on top of Twisted. This really looks like magic - you can basically take old-fashioned synchronous code, stick "yield" statements before all the blocking calls, and get asynchronous behaviour! (David Mertz got a mention here, too.)

There was a talk about building a system for traders in Ghana to upload VAT transactions live. This wasn't of much technical interest (though there were interesting bits and pieces such as the limitations of the Django ORM) but the general background, dealing with the Ghanaian government, etc. was fascinating. Various other talks discussed web-based projects, and how they chose different tools - Django, MoinMoin, etc. If I can work out how to throw all my WordPress installs away and never have to look at another line of PHP I will be very happy. 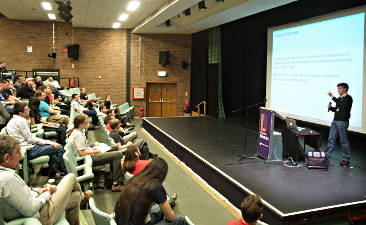 A talk on the SHOGUN machine learning framework was mostly a general overview of ML, which was nicely presented but didn't have anything new to me in it; SHOGUN itself seems like a really nice package, however. A talk on the new float repr was an overview of Python's handling of floating point numbers. Other memorable talks looked at OpenGL, JessyINK (creating SVG presentations in Inkscape and viewing them in Firefox), programming Microsoft Office apps directly from Python, python and the IMAP protocol (I hadn't realised that Basser's Piers Lauder had written the Python IMAP library), and the new regex and re2 modules (respectively a replacement and an alternative to re).

Guido's keynote, answering questions provided on the web in advance, was good fun, as were the 5 minute lightning talks.

I also got to see a bit of Birmingham — at least the city centre and the museum — and hang out with interesting people. And I won a portable solar charger in a Google raffle.