We only had little bits of time to see Birmingham, fitted in around the Europython 2010 conference we were attending. It's not the most attractive city, from what we saw. The shops seem segregated into large shopping malls (such as the Mailbox and the Bull Ring) and cars dominate in a way they certainly don't in Oxford. And it was gloomy, with occasional drizzle, for pretty much the whole four days we were there.

There are some nice old buildings, however, in amidst the 60s and 70s concrete blocks - the ones in red brick are particularly striking.

Birmingham (and the Midlands) also has a fascinating history - "dark satanic mills" and all that - and I want to come back for a proper visit sometime. 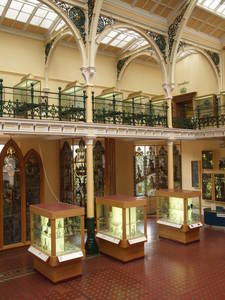 The Birmingham Museum has some nice material - I really only looked at the part of the Staffordshire Hoard on display and the ceramic and tile and glassware "industrial" gallery.

We fitted in a trip to Ladypool Road for Balti curry, which is a local speciality.

No one believed me when I suggested "Balti" must have derived from Baltistan - an area of northern Pakistan - but Wikipedia gives that as the most likely etymology, with an alternative derivation from the name of the cooking pot Balti curry is served in (ultimately derived from the Portuguese!).