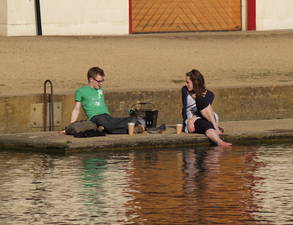 After photographing chimneys, I switched to photographing people along High St. I stopped at the Last Bookshop (where I bought three books), got an icecream from G+D's, and then walked back home along the river, taking more photographs of people relaxing or rowing.

There were lots of people on High waiting for buses.

People were strolling along the river, or had hired boats of one kind or another and were on it.

Many people seemed determined to turn themselves the colour of lobsters. (Being Australian, I was wearing a hat, but no one else was.)

There were some serious rowers practising, complete with coach on bicycle.

And lots of other people on the riverbanks.