<- reading at six and a half
Humanities in primary schools ->

Kenneth Katzner's Languages of the World is being updated and since I'd reviewed the previous edition I'd been asked for comments on that and had my copy lying around. Browsing through it with Helen, she decided that Georgian was the most attractive script, so we transliterated and translated the first word (ღმერთსა / ghmertsa = to God) in the sample text, with the aid of Google Translate and Wikipedia. We're not about to learn Georgian, but I think she understands the difference between transliteration and translation now.

This might be a fun activity to do with Helen's class, if only to expose them to a non-Latin orthography. I think one of her classmates is Tibetan or Bhutanese, and the sample Tibetan passage in Katzner starts "Let us salute the teachers!", so maybe we could use that. 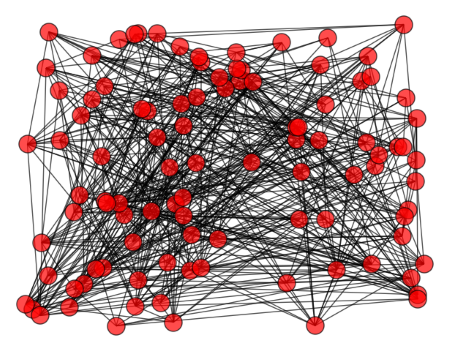 I was reading a post by John Cook on the spectra of random graphs and Helen asked me what the picture (right) was. So I explained what it was — an instance of G(100,0.1), it's a graph with 100 vertices and edges drawn with 0.1 probability — and we tried counting how many edges there were from some of the clearer vertices. (These are sometimes called Erdős-Rényi graphs, so I also got to explain that the Hungarian "double acute" is different to an umlaut.)

Then I had the idea that we could try doing this ourselves, for much smaller graphs, using pen and paper and dice. So we constructed nine instances of the random graph model G(4,⅓), rolling dice to do the selection. 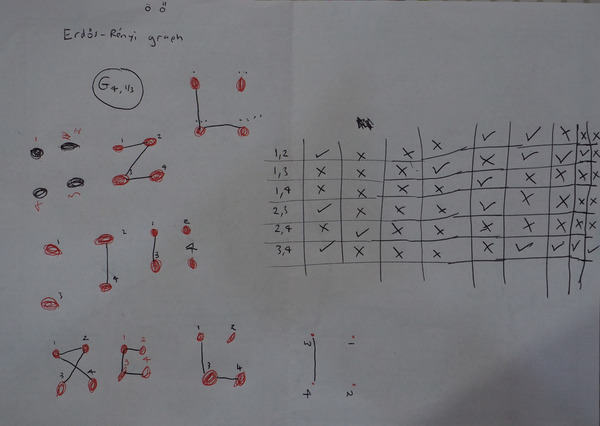 We did the 1/3 randomisation by selecting two different numbers out of the six dice possibilities for each graph generation, which I thought would be confusing but may actually be less so than always using 1 and 2, or 5 and 6. Helen seemed to understand what we were doing here, anyway, even though this is quite a complex procedure in itself, even if obvious to adults. (If doing this again, I'd use labels a, b, c, d for the graph vertices instead of numbers, to avoid confusion with the dice numbers — or just do G(4,½) instead and use a coin toss! It was Helen's idea to use . .. ... and .... on one of the graphs.)

To be honest I don't think this makes much sense as a maths activity for six year olds but it's the kind of thing that happens when answering questions. And we had a lot of fun.

I'm not sure about her Mkhedruli (Georgian script), but Helen's handwriting has really improved: I can barely tell now which of the columns of ticks and crosses I did and which she did, or who labelled the vertices on which graphs. And I fear the neater ones are not mine.