<- Oxford for Cars
A Phoney Normal? School and Work ->

As an East Oxford example, consider Cricket Rd and Rymers Lane, which together run 1.3km from Howard St to Between Towns Rd. There are fourteen sets of traffic calming measures here, mostly speed humps combined with chicanes but in a few places just one or the other. (See the photos at the end of this post.) No one would ever design a street like this; it has clearly been retrofitted to try to cope with levels of motor traffic it was never intended to carry.

There's a large park with several playgrounds directly on this road, along with a nursery (Flo's), a primary school (St Frideswide's) and a high school (St Gregory the Great); it's the catchment boundary for two other primary schools (Larkrise and St Christophers), with some children from each having to cross it to get to school. And it is supposedly part of a designated "quiet" cycling route connecting Cowley and Littlemore with the city centre. 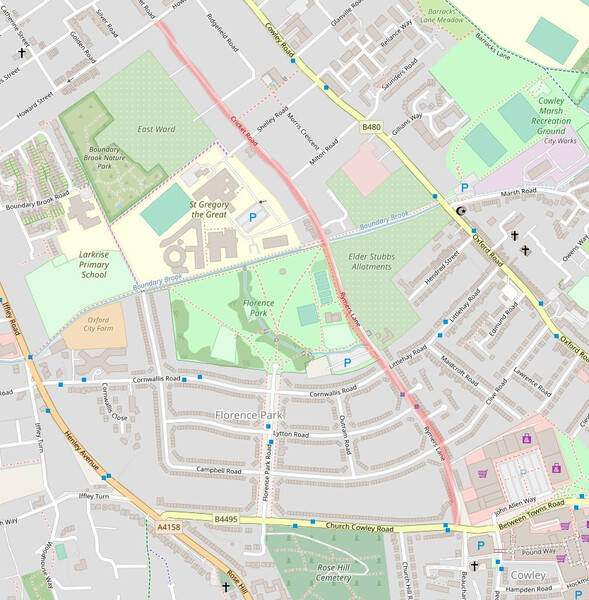 Some photos of the morning school run (courtesy of John Kentish):

And here's a video (courtesy of Scott Urban):

It's quite obvious to anyone with experience of this street that all the traffic calming measures here don't really work. The chicanes provide some protection for crossing, though that's still dangerous as drivers often accelerate to get through them before vehicles going the other way. But the junctions are terrible to cross, especially the one with Littlehay/Cornwallis, where there's traffic turning in all directions. And the effect for anyone cycling is like going through a mincing machine, being forced to repeatedly merge with the motor traffic at the chicanes and being overtaken multiple times in between them.

My challenge to anyone opposing this being turned into a low traffic neighbourhood is: what's your alternative plan to make it safe for children to walk and cycle across or along this route, so they can get to school, to the park, or to their friends' houses? How do we enable older, frailer, or slower adults in the area to get out and about, to go to the shops, get to the park or visit friends?

It should be clear that adding more traffic calming measures isn't going to help.

The county council thinks that all it needs to do is "encourage" people to cycle and deploy an app, which is such a farcical idea I don't even know where to start.

We continue to encourage residents to cycle. Meanwhile, we are also soon to launch an app to help transform active travel. More to be announced soon as part of Walk to School week.

The only real alternative I can think of — to turning the area into a low traffic neighbourhood and blocking through traffic here as part of that — would be to accept the levels of motor traffic and redesign the route accordingly (effectively to upgrade it to a B road, even if not formally). This would involve putting in proper signalised junctions at either end and at the Littlehay/Cornwallis intersection, putting in two or three pedestrian crossings to support access to the schools and park, and taking out all the on-street parking to fit in two-way traffic. This would cost at least a million pounds and more likely two or three, and the result would still (because of insufficient width) be sub-standard as a main road — putting in adequate cycle lanes would be impossible, completely killing this as a safe cycling route.

To supplement redesign as a low traffic neighbourhood, this area also needs a School Streets scheme and planning to reduce driving to the schools or to shift it so the drop-off and pickup locations are more distributed, and separate motor vehicles from vulnerable road users as much as possible.

Here are photos of all fourteen of the existing traffic calming measures on Cricket Rd/Rymers Lane, proceeding from north to south.

Will reducing motor traffic reduce risks? It seems pretty obvious, given pretty much all the injuries involve motor vehicles, that it will. And the evidence from where this has been done elsewhere is clear:

"we find a three-fold decline in number of injuries inside low traffic neighbourhoods after implementation, relative to the rest of Waltham Forest and the rest of Outer London. We further estimate that walking, cycling, and driving all became approximately 3-4 times safer per trip. There was no evidence that injury numbers changed on boundary roads." ("The Impact of Introducing Low Traffic Neighbourhoods on Road Traffic Injuries", Anthony A. Laverty, School of Public Health Research, Imperial College London)