modal shift in the school run

Modal shift in action! Seeing individual children at Larkrise taking up cycling or walking is great, but this photo gives a feel for the broader picture. I did a count and there were twenty bikes more than would fit into the school's cycle parking: this rack was eighteen over capacity and the other was two over! (Normal was fewer cycles than spaces.) And it's still happening: there are still people planning cycle training for their children, trying to buy bikes, and so forth. There are also families who have switched from driving to walking, and increasing numbers of older children being allowed to walk to school by themselves. END_OF_DOCUMENT_TOKEN_TO_BE_REPLACED

things that aren't alternatives to LTNs

Various things have been proposed as alternatives to LTNs. Some of the proposals are complementary to low traffic neighbourhoods rather than alternatives to them. Others rely on technology that doesn't exist, funding that doesn't exist, or are otherwise fantastic. None will achieve the core active travel and liveability goals of a low traffic neighbourhood. END_OF_DOCUMENT_TOKEN_TO_BE_REPLACED

Consider the junction where the B4495 (Church Cowley Rd) meets the A4158 (Henley Avenue/Rose Hill). Is this the worst junction in Oxford? END_OF_DOCUMENT_TOKEN_TO_BE_REPLACED

Should there be baseline measurement and assessment of LTNs? Hell to the yeah. Will there be? Likely, yes. What should we assess? Overall motor traffic volumes, traffic volumes on peripheral main roads, traffic volumes in adjacent areas, ideally pollution also (but traffic volumes will likely be an incredibly close correlation if not), walking & cycling rates, resident feedback and more. But, wait.... when should we measure? This is really important. IMO measurement of the post-scheme steady state should not happen until at least six months after all schemes are in fully. END_OF_DOCUMENT_TOKEN_TO_BE_REPLACED

calming traffic and lowering speeds is not enough

Lower speed limits and speed limit enforcement keep cropping up as an alternative to low traffic neighbourhoods (or to city-wide action to take back space from motor trafic). Traffic calming and lower traffic speeds are an important complement to reducing motor traffic volumes, but not an alternative to doing that. END_OF_DOCUMENT_TOKEN_TO_BE_REPLACED

I think the biggest gain from controlled parking zones is the prevention of dangerous parking. This can be illustrated by the case of Boundary Brook, in the proposed Donnington CPZ Zone of East Oxford. Vehicles parked here block routes, prevent visibility, and pose a serious risk to the children at Larkrise primary school, as well as to residents and to people who use the area as a walking or cycling route.There are four year olds who cycle to school here with their parents; there are nine year olds who walk here unaccompanied. END_OF_DOCUMENT_TOKEN_TO_BE_REPLACED

can we live without that junction?

It must have been in 2013 or 2014, when I was still pushing Helen around in a stroller. Coming back from a friend's place on Campbell Rd, I got her safely across Cornwallis Rd at its junction with Rymers Lane, breathed a sigh of relief, and had the idea that a lot of problems would be solved if that junction were simply destroyed — or, to be more accurate, made impassable to motor traffic. At the time this just seemed like a fantasy.

As an East Oxford example, consider Cricket Rd and Rymers Lane, which together run 1.3km from Howard St to Between Towns Rd. There are fourteen sets of traffic calming measures here, mostly speed humps combined with chicanes but in a few places just one or the other. END_OF_DOCUMENT_TOKEN_TO_BE_REPLACED

Oxford already has a lot of low traffic neighbourhoods, without through routes for motor traffic (which is restricted to access). Some of these are "natural", in that they were effectively created by the geography, but new areas of housing are built as low traffic neighbourhoods — no one designs residential streets that will attract through traffic — and others have been retrospectively implemented by modal filters, usually bollards or gates. Here I document some of the latter. END_OF_DOCUMENT_TOKEN_TO_BE_REPLACED

There is nothing at all complicated about low traffic neighbourhoods, even if urban planners turn them into acronyms ("LTNs") and introduce jargon such as "modal filter". END_OF_DOCUMENT_TOKEN_TO_BE_REPLACED 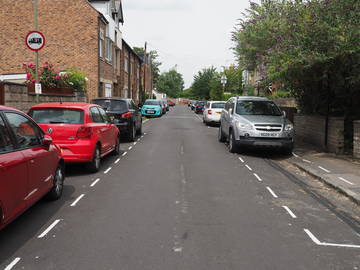 The area we're in has recently been made a controlled parking zone, meaning that only vehicles with an area permit can park in it. Residents have to pay £60/year for a permit, with a maximum of two per house, and get a set of one-day vouchers for use by visitors or tradespeople. END_OF_DOCUMENT_TOKEN_TO_BE_REPLACED