Consider the junction where the B4495 (Church Cowley Rd) meets the A4158 (Henley Avenue/Rose Hill). Is this the worst junction in Oxford? There are certainly bigger and more prominent junctions, with some pretty awful design features — I have looked at some examples — but this junction really does have a special horror to it. 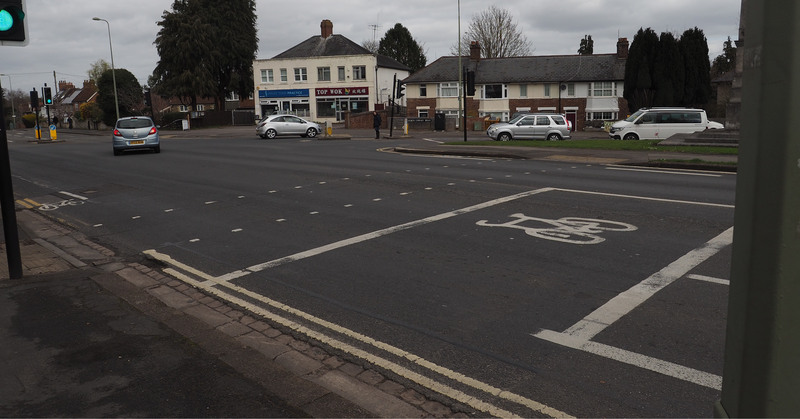 It is a simple signal-controlled T-junction, with two lane approaches on the larger Henley Avenue and one on Church Cowley Rd. But the striking thing about it is that there are no pedestrian phases! Crossings are marked, with dropped kerbs and tactiles, and two of the three have small islands with reflective wands (too small to hold a child's bike), but otherwise there's no protection at all. Crossing is uncomfortable and stressful for fit and alert adults, and simply not safe for children or slower adults. The A4158 carries 12,000+ motor vehicles a day here.

The roads here have 30mph speed limits, but it is common for drivers to exceed that, given the carriageway width and straight approaches. The junction also has a broad sweeping corner that can be taken at speed, turning left from Henley Av into Church Cowley Rd. 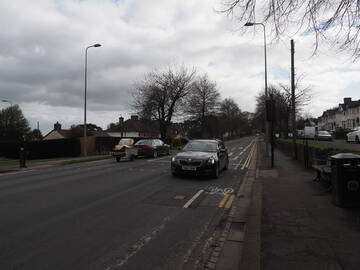 The south-eastern crossing of the A4158 (photos above and right) lacks even an island. Here pedestrians have to cross three lanes of (notionally) 30mph motor traffic coming from three different directions (and two cycle lanes, as a extra bonus). Visibility is not terrible, but it's twelve metres kerb to kerb, so slower people will be interacting with vehicles they couldn't possibly have seen (or been seen by) when they stepped onto the carriageway. It is mind-boggling that this has tactiles marking it as a crossing place for the visually-impaired; that almost feels like a trap. 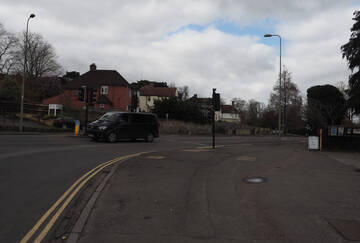 The other two crossings are not quite so appalling, but crossing the B4495 requires looking over one's shoulder to check for traffic turning left around a wide, sweeping corner. (It should be fairly obvious how bad this junction is for cycling. The worst movement is probably heading straight uphill on the A4158, with motor traffic turning across one at high speed.)

The cemetery and the lack of permeability northwards to Campbell Rd restrict the demand for walking at this junction, but it is still on the direct route for anyone wanting to (say) walk from Iffley to the Templars Square shops, or from Rose Hill to Florence Park. The nearest crossings on the A4158 are 450 metres to the south-east, at the traffic lights at the shops, or 350 metres to the north-west, at the signalled crossing at the junction with Cornwallis, and on Church Cowley Rd it's a full 700 metres to the signalled junction at Crowell Rd (about which see below). 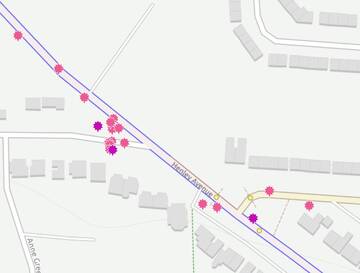 The crash record of this junction isn't that bad — presumably the reason the county has managed to get away with leaving it like this — but that is likely because it is so horrible that people avoid using it: I wouldn't let my child walk to school if it involved crossing here. People may be opting, sensibly, to cross the A4158 to the north-west, away from the junction — and there is a large cluster of collisions there.

Clearly this junction needs pedestrian signal phases. These would only be activated when needed, but would still delay traffic and result in longer queues on the approach roads in peak periods. So fixing this junction pretty much requires the adjoining low traffic neighbourhoods as a prerequisite, otherwise that would push more traffic through the Westbury-Church Hill and Cornwallis-Florence Park Rd "short-cuts" that avoid this junction.

This has a pedestrian phase, indeed an all-green one that allows diagonal movements. But with just 10 seconds for the clearance phase (6 seconds blank and 4 seconds red but with no traffic authorised to move), that assumes a really brisk 2.5 metres/second, from a standing start, for a diagonal crossing. This really needs to be extended to at least 20 seconds, even to get to a more normal (but still rather brisk) 1.2m/s. Which might reduce the peak motor traffic throughput of the junction by 5-10%... So, again, this change can only really be done with the low traffic neighbourhoods in place, otherwise it would just push more motor traffic down Rymer's Lane.

There may also be a case for a zebra crossing between these two junctions, perhaps at the bottom of Church Hill Rd.