can we live without that junction?

It must have been in 2013 or 2014, when I was still pushing Helen around in a stroller. Coming back from a friend's place on Campbell Rd, I got her safely across Cornwallis Rd at its junction with Rymers Lane, breathed a sigh of relief, and had the idea that a lot of problems would be solved if that junction were simply destroyed — or, to be more accurate, made impassable to motor traffic. At the time this just seemed like a fantasy.

the junction in 2020, after it was "calmed" with a junction table

Back then I'd never heard the term "low traffic neighbourhood" — the Waltham Forest schemes were still called mini-Hollands — and I was still learning (from reading about the Netherlands, and from people like Graham Smith and Richard Mann at Cyclox) how important low traffic, low speed local streets were in making cycling accessible to everyone. I hadn't got involved with our local primary school yet, and getting first-hand experience of the barriers streets like Cornwallis Rd and Cricket Rd pose to children walking or cycling to school.

It wasn't till 2018 that Oxfordshire Liveable Streets was set up and I met Scott Urban. In 2018 I also went on a CyclOx study tour of Waltham Forest. In 2019 OLS and residents crowd-funded a costed plan for a low traffic neighbourhood in Florence Park. In that same year a raised table was added to that junction, to no real effect. But then in 2020 came the Emergency Active Travel Fund and the excitement of funding for low traffic neighbourhoods in Florence Park and two other areas of Cowley. 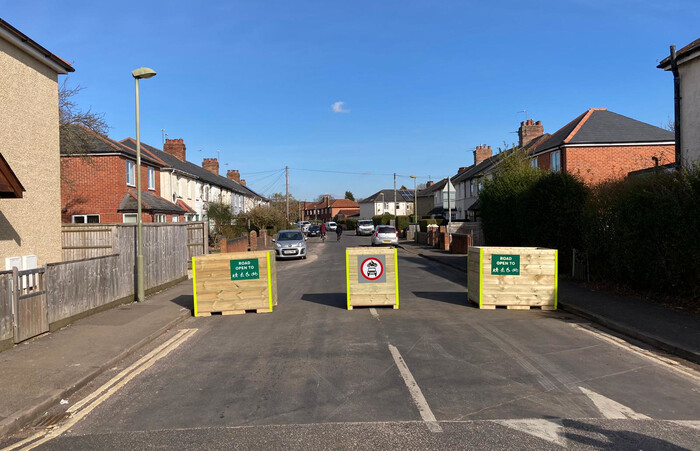 Yesterday the modal filter on Littlehay Rd went in, taking out motor traffic on one arm of that intersection, and on Friday a modal filter will go in on Rymer's Lane, a bit to the north rather than on the junction, but still blocking through traffic. There are still some bollards and bus gates and school streets schemes to come, but the Church Cowley filters are in place and the Temple Cowley ones go in next week. It's taken a long time, but it's actually happening.