The key goal of Vision Zero is "to eliminate all traffic-related deaths and severe injuries, while increasing safety, health, and mobility for all". Vision Zero was originally a Swedish idea, but it has been adopted by the Netherlands and by cities such as London, Oslo, Seattle and Denver — and now by Oxfordshire, along with some other local authorities and regions.

The core idea is not accepting that serious road harm is inevitable.

"It is neither inevitable nor acceptable that anyone should be killed or seriously injured when travelling in London. When we leave our homes each day, we should feel safe and confident about the journey ahead." (Transport for London)

The state of Victoria, Australia has an excellent Vision Zero video. (Oxfordshire averages around thirty deaths per year rather than Victoria's two hundred, but that just makes for a more realistically sized family.)

The second clause rules out approaches which reduce deaths and injuries by discouraging vulnerable people from using the roads at all and reducing their mobility options. (Examples include multi-stage pedestrian crossings, guardrails to stop pedestrian movements on desire lines, and similar "safety" measures that are actually "improve motor traffic flow" measures.)

Safe Systems (US) and Sustainable Safety (Netherlands) approaches to Vision Zero emphasize the realities of human psychology: people are fallible and some will inevitably make mistakes.

"Applying the Safe System approach involves anticipating human mistakes by designing and managing road infrastructure to keep the risk of a mistake low; and when a mistake leads to a crash, the impact on the human body doesn’t result in a fatality or serious injury."

They also emphasize a holistic approach, aiming for a culture of safety that covers all aspects of road design, engineering, and use, with effective allocation of responsibility and ongoing learning and innovation.

"In a sustainably safe road traffic system ... the road and the vehicle protect you and those around you against major traffic hazards ... traffic professionals work together and check one another to achieve a maximally safe result ... the road is intended to facilitate traffic flow or exchange across traffic, but not both ... every child can safely walk or cycle to school, thanks to proper neighbourhood planning, a safe road lay-out, safe speeds, and being sufficiently physically protected ... the older road user understands how the traffic system is intended to work and can thus safely operate in traffic situations ... the government accepts ultimate responsibility for a casualty-free traffic system ... unsafety and each party’s responsibility in connection with it are acknowledged and acted on using a risk-based approach ... all fatal crashes are investigated to establish why things still go wrong."

The Hierarchy of Controls 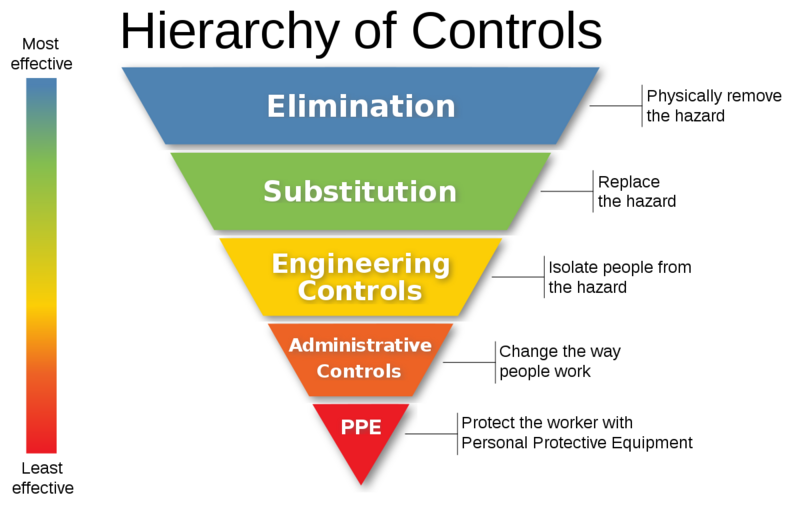 (From the US National Institute for Occupational Safety and Health.)

Can it Work in Oxford?

I focus on Oxford because I know it best. It is also cities that have taken the lead in Vision Zero strategies elsewhere.

Vision Zero approaches have been successful in some European cities, but have failed in many US cities: "In 2019, Helsinki had exactly three traffic fatalities — and none was a pedestrian or cyclist. For comparison, the capital of Finland has roughly as many residents as Las Vegas, a Vision Zero city where 304 people died on the road that same year." A key difference? "You need to make radical choices in terms of reallocation of space, otherwise the decline in deaths simply is not going to happen."

So one risk is a failure of political will, driven by fear and by pressure from angry car users. Polling shows that a large majority of Oxford residents support all three of the core measures in the Central Oxfordshire Travel Plan (COTP), but opponents of the schemes can see immediately and directly how they will be inconvenienced by them, whereas the gains from the scheme are less direct and less likely to motivate people to write to their representatives. (Councillors also need to do a better job of communicating what the county is planning and why.)

Another risk is the county's Vision Zero program being siloed off, due to structural problems within the administration, so Vision Zero thinking isn't incorporated into planning for junction redesigns, new Controlled Parking Zones, etc. Even if the government is prepared to countenance major changes, neither members nor officers seem to fully understand the links of those schemes to road danger reduction. There is also a risk of the program being too reactive — "someone was killed at this junction, so lets change some things there" — rather than taking a broader perspective and considering that pretty much every junction in Oxford has safety problems, or building a culture where road danger reduction is a core part of planning and implementation for all transport schemes.

There is some recognition that this is a challenge: "It is important, however, to recognise how fundamentally different an approach this is to what has preceded it, and to understand what it will mean in practice. ... Equally, from both a member and officer side, Vision Zero means doing things differently to how they have been done previously. Longstanding assessments, judgements and processes must all be reconfigured to reflect the shift in approach." (Report of the Transport Policy Developing Working Group of the Place Overview & Scrutiny Committee – 15 June 2022, Paragraph 48 and Conclusion 9)

Inside Oxford, people cycling suffer a disproportionate number of injuries, so Vision Zero programs will focus on that (the first of the county's Vision Zero working groups covers cycling, and Oxford University's too). That shouldn't mean neglecting other victims of road violence, however — and the broader county is rather different.

The core schemes in COTP will do a fair bit to reduce motor traffic, especially in the inner areas of Oxford with the largest numbers of people walking and cycling. But the traffic filters are seen largely as a bus prioritisation and congestion reduction measure and will neither impose restrictions on HGVs nor reduce motor traffic enough for safer junction designs. And the ZEZ is seen only as an air pollution measure.

There are two relatively fast and relatively cheap schemes which would contribute greatly to reducing road danger and which could be implemented ahead of, or alongside, the core schemes in COTP. These are also going to be politically problematic, however, albeit in different ways.

The first would be removing on-street parking on main roads where it contributes to high collision rates (this is Action 6 in COTP). Cowley Rd is the obvious start here; the evening parking on High St might be another candidate. This will not be popular with businesses, though given the small amounts of parking involved and the potential gains for public realm and foot and cycle accessibility that is I think misguided.

The second is extending 20mph speed limits to cover the entire city within the ring-road (which somehow was left out of COTP). Even without enforcement, the Quickways experience has shown that this does slow traffic, and increasing numbers of vehicles with Intelligent Speed Assist should steadily improve compliance. This is not popular with the bus companies, however — witness the recent deferral of a 20mph scheme for Abingdon due to their objections.

Why are all the proposed Vision Zero measures challenging? If there were any way to seriously reduce road danger that didn't upset anyone, it would have been implemented decades ago.